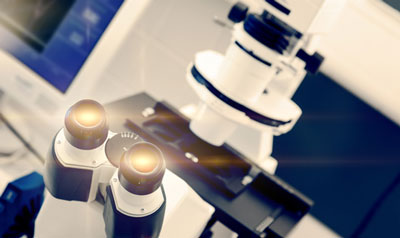 Scientists have pioneered the use of a high-powered imaging technique to picture in exquisite detail one of the central proteins of life – a cellular recycling unit with a role in many diseases.

The proteasome complex is present in all multicellular organisms, and plays a critical role in cancer by allowing cancer cells to divide rapidly.

Researchers used a technique called electron cryo-microscopy, or ‘cryo-EM’ – imaging samples frozen to -180oC – to show the proteasome complex in such extraordinary detail that they could view a prototype drug bound to its active sites.

Scientists from The Institute of Cancer Research, London, and the Medical Research Council (MRC) Laboratory of Molecular Biology in Cambridge were able to visualise the proteasome complex down to a resolution of around 3.5 Angstroms, or 3.5 ten-billionths of a metre.

Research could help scientists use cryo-EM in drug design studies

The research could help other scientists to use cryo-EM in structure-based drug design studies – in which researchers build the best possible drugs starting from a molecule which already binds to the active site of a target protein.

Until recently such studies were generally only possible using X-ray crystallography, but researchers have been unable to crystallise many protein complexes in order to study them using that technique.

The proteasome plays a key role in the smooth running of a healthy cell, facilitating cell renewal and death – chopping up proteins tagged for destruction into short polypeptides which can then be converted to amino-acids and recycled for use in building new proteins.

It plays an important role in cell division, which is controlled by the synchronised destruction of regulatory proteins. Blocking the proteasome prevents this regulated recycling of amino acids and triggers controlled cell death, particularly in fast-dividing cells typical of cancer. Some cancer drugs have already been developed to target it.

Images produced by the study clearly show the structure of the proteasome complex – with the protein backbone of each of its 28 subunits visible along with most of the side chains of the proteins.

An inhibitor molecule used by the researchers was shown to be visibly bound at each of its three target sites on the proteasome.

Cryo-EM emerging as a complementary approach to X-ray crystallography

Electron cryo-microscopy is emerging as a complementary approach in cancer drug design to X-ray crystallography – which involves generating highly ordered crystals of proteins and hitting them with X-ray radiation.

Cryo-EM offers the opportunity to study protein complexes in conditions closer to those in the human body.

In this experiment, researchers rapidly froze samples of the proteasome bound to the inhibitor to allow them to be examined in the electron microscope at -180oC. They bombarded their samples with electrons and generated images using complex image-processing software.

Dr Emma Smith, senior science communications officer at Cancer Research UK, said, “Revealing the molecule’s detailed shape could be the first step towards designing more precise drugs to block it. This molecule plays an important role in some cancers and drugs that block it are already available to patients – but making drugs that are more effective and less damaging to healthy cells could lead to patients living longer and reduce side effects.”