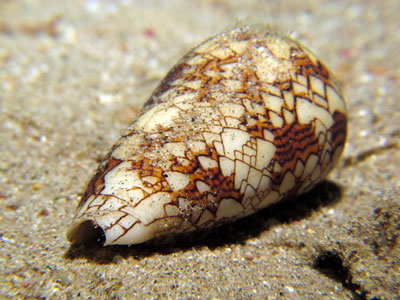 University of Queensland researchers have discovered thousands of new peptide toxins hidden deep within the venom of just one type of cone snail.

Researchers hope the new molecules will be promising leads for new drugs to treat pain and cancer.

Professor Paul Alewood, from UQ’s Institute for Molecular Bioscience, said the team used biochemical and bioinformatics tools to develop a new method to analyse the structure of the venom toxins, allowing them to delve deeper than ever before.

“Cone snail venom is known to contain toxins proven to be valuable drug leads,” he said. “This study gives the first-ever snapshot of the toxins that exist in the venom of a single cone snail.

“Cone snail venoms are a complex cocktail of many chemicals and most of these toxins have been overlooked in the past.”

Using their new method that involved accurately measuring and analysing the structure, activity and composition of the diverse range of proteins within venom, researchers discovered the highest number of peptides (mini-proteins) produced in a single cone snail.

“We also discovered six original ‘frameworks’ – 3D-shaped molecules suitable as drug leads – which we expect will support drug development in the near future,” Professor Alewood said.

There are 25 known frameworks discovered over the past 25 years, many of which have already led to a drug or drug lead for several diseases.

The cone snail species studied by the researchers (conus episcopatus) is found along the east coast of Australia and is one of 700 different species of cone snails.

“We anticipate there are a lot more interesting molecules to be found in the venom of other species, and we are keen to explore these using our new approach,” Professor Alewood continued. “This new method of analysis can also be used in research on other animal venoms, or in related fields, such as studying protein expression from cells.

“It will help us gain a better understanding of biology, look for disease patterns or discover potential new drugs.”

The study findings are published in Proceedings of the National Academy of Sciences.