Researchers from have identified the molecular mechanism that an adhesion protein of H. pylori uses to attach to stomach ulcers… 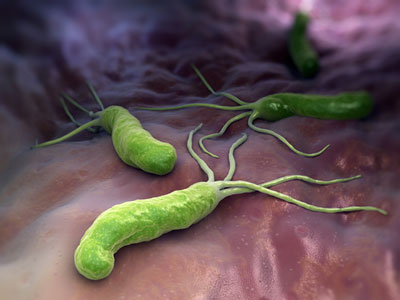 Helicobacter pylori (H. pylori) is a disease-causing bacterium that survives in our stomachs despite the harsh acidic conditions.

It is considered one of the most common bacterial infections worldwide and a leading cause of dyspepsia, peptic ulceration and gastric cancer.

Through unique evolutionary adaptations, H. pylori is able to evade the antiseptic effect of stomach acid by hiding within the thick acid-resistant layer of mucus that coats the stomach wall. Once within the mucus layer, the bacterium latches onto sugars naturally found on the stomach wall using its adhesion proteins. This attachment is so effective that the bacterium can resist attempts by the body to ‘flush’ it away, allowing the pathogen to colonise with impunity.

Now researchers from the University of Nottingham and AstraZeneca have identified the molecular mechanism that an adhesion protein of the bacterium uses to attach to stomach ulcers.

Naim Hage, a postgraduate researcher who worked on the project, said, “Although it’s still very early, the insight we’ve gained from this study is already very exciting news for patients.”

Insight could lead to the development of new treatments for H. pylori infections

Using x-ray crystallography, the scientists were able to study the interactions between the H. pylori adhesion protein BabA and Lewisb sugars of the gastric mucosa at the atomic level. They found that  BabA possesses a specific groove that enables it to securely attach to Lewisb using a network of hydrogen bonds. The research team also found that if a few of the hydrogen bonds are disrupted, the network doesn’t function and binding can no longer occur. This insight into the molecular interactions required for adhesion is a promising lead for the development of new strategies for the treatment of H. pylori infections.

The study forms the foundation for future research between The University of Nottingham and AstraZeneca R&D into “anti-adhesion strategies” that would work by clearing H. pylori out of the stomach through dislodging the bacterium off the stomach wall using BabA:Lewisb inhibitors. Such novel strategies are needed to help treat H. pylori infections, which are globally gaining resistance to conventional antibiotic therapies.

Naim said, “Because BabA is unique to H. pylori, we can specifically target, and hopefully eradicate, this bacterium without affecting the other good bacteria in our normal flora. If successful, this therapeutic strategy will also be extremely useful for treating H. pylori infections that are already resistant to antibiotics.”

The research findings are published in Science Advances.