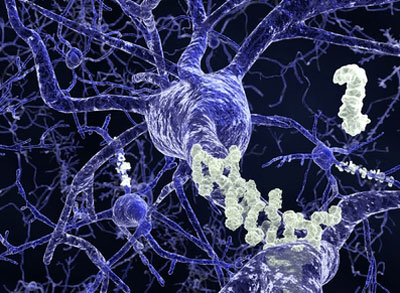 Rockefeller University scientists and their colleagues have identified a series of naturally occurring molecular steps—known as a pathway—that can dampen the production of amyloid-β.

The discovery centres around a protein called WAVE 1, which the scientists found to be important in the production of amyloid-β. WAVE1 is known to help to build filaments of a protein called actin that serve as basic components of cellular structures. The reduction of WAVE 1 appears to have a protective effect against the disease.

“Our discovery centers on a protein called WAVE1, which we found to be important in the production of amyloid-β. The reduction of WAVE1 appears to have a protective effect against the disease,” said Paul Greengard, Vincent Astor Professor, head of the Laboratory of Molecular and Cellular Neuroscience, and director of The Fisher Center for Alzheimer’s Research. “When levels of amyloid-β rise, there is an accompanying increase in another molecule, AICD, which reduces the expression of WAVE1. This has the effect of reducing the production of amyloid-β.”

“By targeting steps within this newly discovered pathway,” he adds, “it may be possible to develop drugs to reduce amyloid-β that potentially could be used to either treat or prevent Alzheimer’s disease.”

Activating the pathway may protect against Alzheimer’s disease

The team examined the levels of WAVE1 in mouse and cellular models of Alzheimer’s disease and found that they were unusually low. Research done by a collaborator at Columbia University found this was also true for the brains of human patients with the disease.

To take a closer look at the relationship between amyloid-β and WAVE1, the researchers tested the brains and memories of mice genetically altered to produce high levels of amyloid-β and varying levels of WAVE1. They found a dose-dependent response: Mice brains with low WAVE1 levels produced less amyloid-β, and these animals performed better on memory tests.

Next, the researchers wanted to know how WAVE1 affects the production of amyloid-β. The precursor to this Alzheimer’s protein is not harmful by itself, and does not normally yield brain-damaging products. However, sometimes the precursor is processed in such a way that it produces disease-promoting amyloid-β.

Because the formation of structural filaments is critical to the process by which cargo buds off and leaves the Golgi, the researchers suspected a role for WAVE1. Their experiments showed an interaction between WAVE1 and the amyloid precursor protein, and confirmed that WAVE1 mediates the formation of cargo vesicles containing amyloid precursor protein.

“The result is a negative feedback loop,” said Yong Kim, a research assistant professor in the lab. “More amyloid-β means more AICD. Our experiments reveal that AICD travels into the nucleus where it reduces the expression of WAVE1. Less WAVE1 means less precursor protein in cargo traveling to the membrane for conversion into amyloid-β. In Alzheimer’s disease, this negative feedback appears to lose its protective effect, and the next step for us is to figure out how.”

“This finding is significant as it provides an opportunity to create new treatments that will protect the brain by activating the pathway we discovered, which will prevent beta amyloid formation,” said Nobel Laureate Dr Paul Greengard, Director of The Fisher Center for Alzheimer’s Research. “This finding could not have been made possible without the ongoing support from the Fisher Center for Alzheimer’s Research Foundation.”

The study findings are published in Nature.