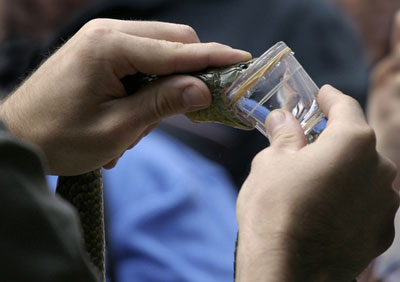 Currently, sea snake antivenom costs nearly $2000 per vial, yet these new findings could result in a future production of synthetic antivenoms for as little as $10-100.

Venomous snakebites represent a major health concern in many tropical and subtropical countries with more than 10 million registered bites each year. In Sub-Saharan Africa alone, an estimated one million snakebites occur annually and about half of them need treatment, many result in amputations and a significant amount result in deaths.

“People in poor countries, including fishermen at work and children playing in the ocean, are bitten, but they can’t afford the antivenom and so they die. They die because it is extremely expensive, not because they cannot be saved. If we could design and synthesise simple antivenoms, producing them would be inexpensive and thus millions of lives could be saved,” said Associate Professor Brian Lohse from Department of Drug Design and Pharmacology, University of Copenhagen. The University of Copenhagen is part of an international research collaboration investigating venom and antivenoms.

By dissecting the venom, scientists were able to identify the individual components in the lethal cocktail of the Olive Sea Snake. Compared to other venomous snakes like the Mamba and Cobra, the Olive Sea Snake venom is remarkably simple.

“This indicates that we could actually develop a synthetic antivenom that might also be used against other sea snake venoms, because of overlapping toxins and the close homology across species. Furthermore, such antivenom would be shelf-stable and would eliminate the cold-chain (constant refrigeration), which is a highly negative factor in terms of storing current antivenoms,” explained Professor Lohse.

Antivenoms are still produced by traditional animal immunisation procedures, which has a number of drawbacks, such as allergic reactions, which in the worst instances end in death. Yet technological advances within biopharmaceuticals and medicinal chemistry could pave the way for rational drug design approaches to snake toxins. This could eliminate the use of animals and bring forward more effective therapies for snakebite envenoming.

“We are determined to continue this international research collaboration whereby we avoid using animals (e.g. horses) in the production of antivenom. We wish to make clean antivenoms by using state-of-the-art biotechnology, hopefully making synthetic antivenom available to all one day,” Lohse concluded.