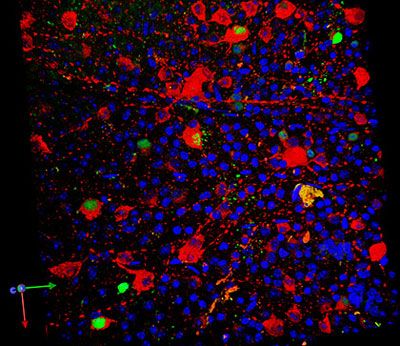 Researchers have found that they can use gene therapy to improve visual in mice models for the vision disorder Leber hereditary optic neuropathy (LHON).

LHON is estimated to affect 1 in 30,000 people in England alone. Early symptoms include blurry vision and usually appear during the teens or early twenties. Eyesight tends to worsen over time, eventually leading to a severe loss of acuity and colour vision.

The US National Institute of Health (NIH), who funded the research, explained that LHON is tied to gene mutations that damage mitochondria. Mitochondria are highly complex, converting nutrients and oxygen into cellular energy. They have their own DNA, and it is mutations within this mitochondrial DNA (mtDNA) that lead to LHON. But the unique nature of mtDNA has presented challenges for developing and testing potential therapies for such diseases.

Until now, there has been no efficient way to get DNA into mitochondria. However, John Guy, M.D., professor of ophthalmology and director of the ocular gene therapy laboratory at the Bascom Palmer Eye Institute, University of Miami Miller School of Medicine, and his team are among the first to develop an approach that can target mtDNA.

The most common mutation behind LHON impairs a mitochondrial gene called ND4. About 15 years ago, Dr Guy began researching gene therapies for delivering a substitute copy of the gene into mitochondria. In most studies and applications of gene therapy, viruses have become the preferred vessel for delivering genes into cells. But most viruses have evolved to invade the body’s cells and penetrate the nucleus and are therefore largely poor at penetrating mitochondria.

Study marks an important milestone towards an effective therapy for LHON

To overcome this, Dr Guy’s team took advantage of the fact that mitochondria import cellular proteins that they cannot make themselves. They attached one such protein to the outer shell of a virus, called an adeno-associated virus, effectively giving the virus a homing signal and entry code into mitochondria.

To create a mouse model for LHON, the researchers loaded the modified virus with a defective copy of the ND4 gene carrying the same mutation that causes about 70% of LHON cases. They injected the virus into fertilized mouse egg cells, and grew the cells to maturity. After breeding the mice through several generations, the researchers had their mouse model.

To develop a gene therapy for LHON, the team packaged the normal human ND4 gene into the same stealthy virus. This combination, when injected into the eye, led to improved visual function in the LHON mouse model. When injected into normal mice, the virus carrying ND4 did not cause any adverse effects on vision.

Maryann Redford, D.D.S, M.P.H., a programme director in Collaborative Clinical Research at NIH’s National Eye Institute, commented on the research, “This study marks an important contribution to research on LHON, and in efforts toward an effective therapy. But the implications are even broader, because the approaches that the investigators used could aid therapy development for a vast array of other mitochondrial diseases.”