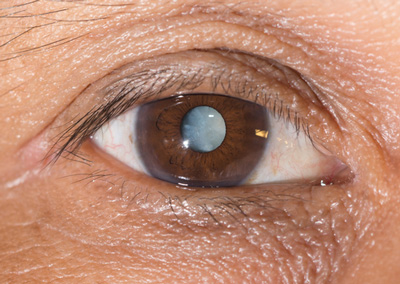 Scientists have identified a chemical that could potentially be used in eye drops to reverse cataracts, the leading cause of blindness.

Cataracts affect more than 20 million people worldwide. Although cataracts can be successfully removed with surgery, this approach is expensive, and most individuals blinded by severe cataracts in developing countries go untreated.

The newly identified compound is the first that is soluble enough to potentially form the basis of a practical eye-drop medication for cataracts.

Cataracts are primarily a disease of aging. A hallmark of the condition is the misfolding and clumping together of crucial proteins known as crystallins.

Crystallins are the major component of fibre cells, which form the eyes’ lenses, and the unique properties of these cells make them particularly susceptible to damage, said Jason Gestwicki, PhD, associate professor of pharmaceutical chemistry at UC San Francisco (UCSF).

“Shortly after you’re born, all the fibre cells in the eye lose the ability to make new proteins, or to discard old proteins,” said Gestwicki. “So the crystallins you have in your eye as an adult are the same as those you’re born with.”

In order for our lenses to function well, this reservoir of crystallins must maintain both the transparency of fibre cells and their flexibility, as the eyes’ muscles constantly stretch and relax the lens to allow us to focus on objects at different distances. The crystallins accomplish these duties with the help of proteins known as chaperones, which keep crystallins soluble.

This state-of-affairs is a delicate one as pathological, clumped-together configurations of crystallins (amyloids) are far more stable than properly folded, healthy forms, and fibre-cell chaperones must continually resist the strong tendency of crystallins to clump. In the new study, led by Leah N. Makley, PhD, and Kathryn McMenimen, PhD, the scientific team exploited a crucial difference between properly folded crystallins and their amyloid forms: put simply, amyloids are harder to melt.

The research group used a method known as high-throughput differential scanning fluorimetry (HT-DSF), in which proteins emit light when they reach their melting point. The team used HT-DSF to apply heat to amyloids while applying thousands of chemical compounds.

The group began with 2,450 compounds, eventually zeroing in on 12 that are members of a chemical class known as sterols. Gestwicki and his group assembled and tested 32 sterols, and eventually settled on one, which they call “compound 29,” as the most likely candidate that would be sufficiently soluble to be used in cataract-dissolving eye drops.

In laboratory dish tests, the team confirmed that compound 29 significantly stabilised crystallins and prevented them from forming amyloids. They also found that compound 29 dissolved amyloids that had already formed. Through these experiments, said Gestwicki, “we are starting to understand the mechanism in detail. We know where compound 29 binds, and we are beginning to know exactly what it’s doing.”

The team next tested compound 29 in an eye-drop formulation in mice carrying mutations that make them predisposed to cataracts. They found that the drops partially restored transparency to mouse lenses affected by cataracts, as measured by a slit-lamp test of the sort used by ophthalmologists to measure cataracts in humans. Similar results were seen when compound 29 eye drops were applied in mice that naturally developed age-related cataracts, and also when the compound was applied to human lens tissue affected by cataracts that had been removed during surgery.

Gestwicki cautions that slit-lamp measures of lens transparency used in the research are not a direct measure of visual acuity, and that only clinical trials in humans can establish the value of compound 29 as a cataract treatment.