Here, Steve Bates, Chief Executive of the BioIndustry Association (BIA), makes a case for the UK remaining in the EU from the perspective of the life sciences sector… 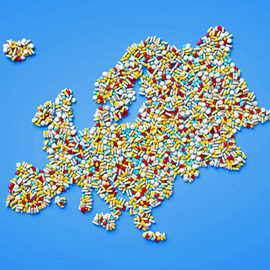 The UK life sciences sector is growing and continually evolving as one of the key high-tech, high-growth sectors that the UK’s economy needs. We work in a global environment so we need to be international in outlook and scope. As the UK looks towards the EU referendum on June 23rd, it is important to highlight the success the sector has experienced as part of the largest global market by volume.

Over a generation, regulators and legislators have built up an integrated European regulatory framework for clinical research and development of new, innovative medicines. It is cornerstoned in the UK, and has significant UK input. We are at present building an integrated Unitary Patent system, which will have a key presence in the UK through a London-based Court for pharmaceutical patents. London is also the home of the EU-wide regulator, the European Medicines Agency (EMA).

If the UK were to leave the EU it would risk unpicking all of that successful work. The EMA would have to relocate because EU institutions cannot be located outside the Union’s borders. There would also likely be political pressure from other Member States to move the UPC court out of London. At a broader level a “Brexit” risks the UK life sciences sector unable to influence the harmonised regulatory framework and central authorisation process for medicines and subsequent single market access that goes with this. This system is a component of the UK’s successful life sciences sector.

In the event of a “Brexit” it is our view that the UK would either have to accept European legislation that it cannot influence (which is the model available under membership of the European Economic Area) or develop new UK-specific rules at cost. Even if the latter option were pursued, in order for the UK to remain an attractive place to do business in for mobile, global companies, similar (if not identical) regulatory systems would need to be established.

In either scenario the UK would be mirroring a system that it cannot influence. This would paralyse the influence of our world leading national regulator, the Medicines & Healthcare products Regulatory Agency (MHRA). The MHRA has been highly influential in a number of successful and innovative European regulatory initiatives, including the PRIME and adaptive pathways schemes and the regulations concerning orphan medicines and advanced therapies. The MHRA also handles the largest number of scientific evaluations of new medicines for the EMA, a task for which it is remunerated.

Beyond the impact on core regulatory matters a “Brexit” could also pose significant risks to the UK’s attractiveness for inward investment and as a location for the world-leading talent the life sciences sector depends upon. All of this would have negative consequences for the UK and its economy. The UK accounts for under 3 per cent of the whole global market and we need to be realistic in thinking whether this will make us an attractive destination for companies looking to headquarter their business in Europe or deciding on a first market to launch their drugs. If the EMA leaves the UK, jobs could follow. A scenario where global players are flying over London to get to an EMA in Stockholm or Rome is not part of our vision for the future of UK life sciences success

The UK is also a net recipient of EU funding for its health research, accessing more funding per capita than any other country. Many biotech companies have benefitted from Horizon 2020 and its predecessors,  The value of funding schemes is not only in the hard cash they provide but the collaboration they facilitate, invaluable in a sector such as life sciences where teams work across companies and borders to foster innovation and develop the most innovative products.

The UK is lucky to be able to attract world leading experts in biotech. Increasing barriers to hiring European talent would also be deleterious to the sector.

The ‘outers’ vision is that having full sovereignty restored to the UK will enable the country to be more pro-science than it is now. This is an amiable aspiration, but it simply isn’t one grounded in reality. The business voice for UK bioscience is strong and united on this issue – they see the future of our sector in Europe, are supportive of effective reform in Europe, ambitious for the UK’s future in Europe and are ambitious for the EU in the world.

Do you agree with what they say?

One response to “UK life sciences are stronger in the EU, says BioIndustry Association”