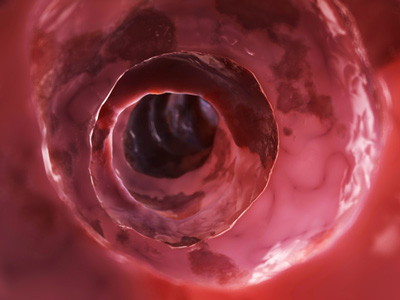 Small proteins that affect communication between cells play an important role in regulating inflammation that occurs during inflammatory bowel disease (IBD), according to a new study.

Researchers compared immune cells in mice with and without intestinal inflammation and identified a new factor, a cytokine called IL-36, that is expressed in the inflamed intestine of mice. They explored the role of this cytokine to determine if it is promoting disease, helping to protect against disease or simply associated with the disease.

“What we found was quite striking,” said Tim Denning, associate professor in the Institute for Biomedical Sciences at Georgia State University. “If we block the effects of this cytokine, IL-36, in a mouse model of intestinal inflammation, the mice were better and had less disease early on, which suggested that this was a pro-inflammatory cytokine. However, when we assessed the ability of mice deficient in the receptor for IL-36 to heal, which is a vital part of resolving intestinal inflammation, they were completely unable to do so. The study highlights the important role of IL-36, not only in driving some of the inflammatory process, but also in helping to resolve the inflammation.”

The two main types of IBD, Crohn’s disease and ulcerative colitis, develop from uncontrolled inflammation in the intestine, which leads to severe diarrhoea, pain, fatigue, weight loss and even death. There are trillions of helpful bacteria inside human intestines, and the immune system is trained not to react aggressively. However, in IBD, the immune system doesn’t tolerate these bacteria and instead fights against them.

In this study, the researchers investigated the factors that may be regulating the immune system’s balance between tolerating these bacteria and reacting aggressively against them. They discovered the dual role of IL-36 in both promoting intestinal inflammation and resolving or healing that inflammation. The findings highlight the significance of understanding the timing and phase of disease, Denning said.

“Treatments that block certain factors, regardless of knowing the role it may be playing at a certain stage of disease, could lead to a poor outcome and may be the reason some clinical trials fail,” Denning said. “It is key to understand what phase of disease patients are in, what cytokines are expressed and the appropriate therapeutic targets during these distinct phases. Often, blocking a factor is not universally beneficial. Immune responses and inflammation, which are often viewed as deleterious, can be both good and bad depending on the context.”

For instance, blocking IL-36 may be beneficial in certain phases of the disease, but eliminating this factor could also make the body unable to recruit and activate cells necessary for healing and resolution of the disease. Therefore, it’s important to understand the pathways IL-36 affects because this cytokine could be valuable in other stages of the disease, he said.