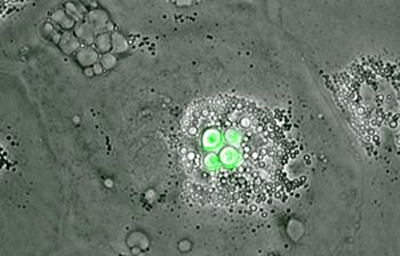 Scientists have discovered that a specialised white blood cell found in birds can destroy a potentially fatal fungal infection.

Cryptococcus neoformans is a fungus that causes fatal infections in those with a weakened immune system. It is one of the most dangerous infections of individuals with AIDS and is thought to cause hundreds of thousands of deaths worldwide, every year.

Birds are known to carry the fungus and their droppings are thought to be a source of human infection; however it has been a longstanding mystery why the birds themselves do not appear to become ill.

Now, a team from the University of Sheffield have shown that a microphage within the bird’s blood system is able to completely block the growth of Cryptococci.

The scientists, led by Dr Simon Johnston, found that the fungus can grow slowly within the bird’s digestive tract, but if it tries to invade the bird’s body then the immune system immediately destroys it – which explains why healthy birds can still help spread the infection.

Dr Johnston said: “Birds have a higher body temperature than humans, 42 o C instead of 37 o C, but this alone is not enough to fully stop the fungus.

“By studying bird cells under the microscope, we have seen that macrophage cells have the ability to completely block the growth of the fungus, which can be fatal in humans.

“Understanding where the disease comes from and how it spreads is critical. If we can learn how some animals are able to resist infection we might be able to gain insights into how we can improve the human immune response to this fungus.”

Research is part of an effort to ultimately eliminate cryptococcosis

This work is part of a much larger international effort to understand, fight and ultimately eliminate cryptococcosis.

Dr Johnston added: “We are now working with leading scientists from all over the world to try and understand where this pathogen came from, how our bodies fight it and what we can do to help our own immune system defend us from this fungus and other related infections.

“Many human diseases are spread by birds, but we know surprisingly little about their immune systems. Discovering how they resist otherwise fatal infections offers the hope of improving our ability to intervene in this cycle and prevent a diverse range of human diseases.”