AngioChip is a powerful platform for discovering and testing new drugs, and could eventually be used to repair or replace damaged organs… 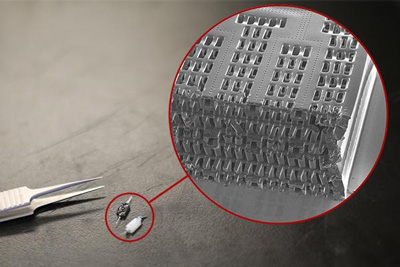 These tiny polymer scaffolds contain channels that are about 100 micrometers wide, about the same diameter as a human hair. When seeded with cells, the channels act as artificial blood vessels. By mimicking tissues in the human heart and other organs, these scaffolds provide a new way to test drugs for potentially dangerous side effects. CREDIT: Tyler Irving/Boyang Zhang/Kevin Soobrian

University of Toronto researchers have developed a new way of growing realistic human tissues outside the body.

Their “person-on-a-chip” technology, called AngioChip, is a powerful platform for discovering and testing new drugs, and could eventually be used to repair or replace damaged organs.

Professor Milica Radisic, graduate student Boyang Zhang and the rest of the team are among those research groups around the world racing to find ways to grow human tissues in the lab, under conditions that mimic a real person’s body. They have developed unique methods for manufacturing small, intricate scaffolds for individual cells to grow on. These artificial environments produce cells and tissues that resemble the real thing more closely than those grown flat in a petri dish.

The team’s recent creations have included Biowire  – an innovative method of growing heart cells around a silk suture – as well as a scaffold for heart cells that snaps together like sheets of Velcro. But AngioChip takes tissue engineering to a whole new level.

“It’s a fully three-dimensional structure complete with internal blood vessels,” says Radisic. “It behaves just like vasculature, and around it there is a lattice for other cells to attach and grow.”

Zhang built the scaffold out of POMaC, a polymer that is both biodegradable and biocompatible. The scaffold is built out of a series of thin layers, stamped with a pattern of channels that are each about 50 to 100 micrometres wide. The layers, which resemble the computer microchips, are then stacked into a 3D structure of synthetic blood vessels. As each layer is added, UV light is used to cross-link the polymer and bond it to the layer below.

When the structure is finished, it is bathed in a liquid containing living cells. The cells quickly attach to the inside and outside of the channels and begin growing just as they would in the human body.

“Previously, people could only do this using devices that squish the cells between sheets of silicone and glass,” says Radisic. “You needed several pumps and vacuum lines to run just one chip. Our system runs in a normal cell culture dish, and there are no pumps; we use pressure heads to perfuse media through the vasculature. The wells are open, so you can easily access the tissue.”

Using the platform, the team has built model versions of both heart and liver tissues that function like the real thing.

“Our liver actually produced urea and metabolised drugs,” says Radisic. They can connect the blood vessels of the two artificial organs, thereby modelling not just the organs themselves, but the interactions between them. They’ve even injected white blood cells into the vessels and watched as they squeezed through gaps in the vessel wall to reach the tissue on the other side, just as they do in the human body.

The researchers say AngioChip has great potential in the field of pharmaceutical testing. Current drug-testing methods, such as animal testing and controlled clinical trials, are costly and fraught with ethical concerns. Testing on lab-grown human tissues would provide a realistic model at a fraction of the cost, but this area of research is still in its infancy.

“In the last few years, it has become possible to order cultures of human cells for testing, but they’re grown on a plate, a two-dimensional environment,” says Radisic. “They don’t capture all the functional hallmarks of a real heart muscle, for example.”

A more realistic platform like AngioChip could enable drug companies to detect dangerous side effects and interactions between organ compartments long before their products reach the market. It could also be used to understand and validate the effectiveness of current drugs and even to screen libraries of chemical compounds to discover new drugs.