Posted: 10 May 2016 | Victoria White, Digital Content Producer | No comments yet 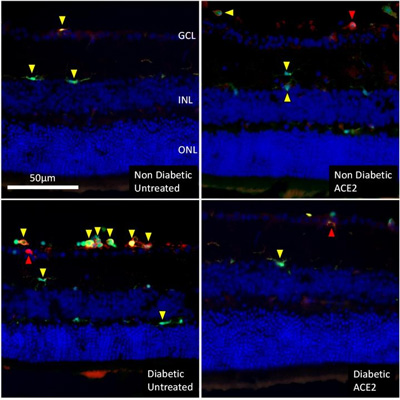 Pathologic changes of the retina caused by diabetes is the leading cause of blindness in working adults.

Now, researchers from Indiana University have described a potential new intraocular treatment based on manipulating the renin angiotension system (RAS) that both prevents and reverses some characteristics of diabetic retinopathy in a mouse model.

Investigators used mice, some of which were injected with streptozotocin (STZ) to induce diabetes. The protective effects of AAV-ACE2 were examined by performing two sets of experiments. In one cohort, AAV-ACE2 was administered two weeks prior to STZ injection. In a second cohort, to evaluate whether the enhanced expression of ACE2 could reverse diabetic retinopathy, AAV-ACE2 was administered six months after STZ, when diabetes and retinopathy were already established.

The investigators found that both strategies effectively decreased the numbers of proinflammatory cells present in the diabetic retina. Leukostasis was only seen in diabetic animals receiving control injections. In addition, using a histological endpoint of retinal vascular degeneration, called acellular capillaries, the group determined that the AAV-ACE2 injection could reverse the diabetes-induced pathology.

“These findings are very exciting because it is traditionally believed that this endpoint of vascular degeneration, acellular capillaries, represents an irreversible lesion,” emphasised lead investigator Maria B. Grant, MD, of the Eugene and Marilyn Glick Eye Institute of Indiana University.

One strength of this experimental approach is that intravitreal administration eliminates the problem of the blood-retinal barrier interfering with access of systemically-administered therapeutic agents. The investigators envision that inducing ACE2 overexpression to improve vascular characteristics and decrease inflammation may be translatable to other vascular diseases such as stroke, kidney disease, and heart disease.