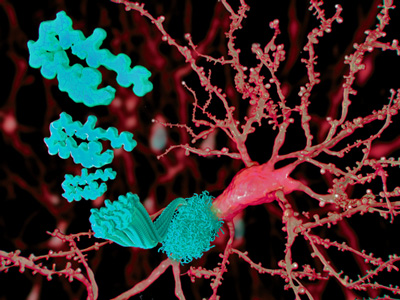 A new study provides additional evidence that amyloid-beta protein – which is deposited in the form of beta-amyloid plaques in the brains of patients with Alzheimer’s disease – is a normal part of the innate immune system, the body’s first-line defense against infection.

Researchers found that expression of human amyloid-beta (A-beta) was protective against potentially lethal infections in mice, in roundworms and in cultured human brain cells. The findings may lead to potential new therapeutic strategies and suggest limitations to therapies designed to eliminate amyloid plaques from patient’s brains.

“Neurodegeneration in Alzheimer’s disease has been thought to be caused by the abnormal behaviour of A-beta molecules, which are known to gather into tough fibril-like structures called amyloid plaques within patients’ brains,” says Robert Moir, MD, of the Genetics and Aging Research Unit in the Massachusetts General Hospital’s MassGeneral Institute for Neurodegenerative Disease (MGH-MIND). “This widely held view has guided therapeutic strategies and drug development for more than 30 years, but our findings suggest that this view is incomplete.”

A 2010 study co-led by Moir and Rudolph Tanzi, PhD, director of the MGH-MIND Genetics and Aging unit, grew out of Moir’s observation that A-beta had many of the qualities of an antimicrobial peptide (AMP), a small innate immune system protein that defends against a wide range of pathogens. That study compared synthetic forms of A-beta with a known AMP called LL-37 and found that A-beta inhibited the growth of several important pathogens, sometimes as well or better than LL-37. A-beta from the brains of Alzheimer’s patients also suppressed the growth of cultured Candida yeast in that study, and subsequently other groups have documented synthetic A-beta’s action against influenza and herpes viruses.

The current study is the first to investigate the antimicrobial action of human A-beta in living models. The investigators first found that transgenic mice that express human A-beta survived significantly longer after the induction of Salmonella infection in their brains than did mice with no genetic alteration. Mice lacking the amyloid precursor protein died even more rapidly. Transgenic A-beta expression also appeared to protect C.elegans roundworms from either Candida or Salmonella infection. Similarly, human A-beta expression protected cultured neuronal cells from Candida. In fact, human A-beta expressed by living cells appears to be 1,000 times more potent against infection than does the synthetic A-beta used in previous studies.

That superiority appears to relate to properties of A-beta that have been considered part of Alzheimer’s disease pathology – the propensity of small molecules to combine into what are called oligomers and then aggregate into beta-amyloid plaques. While AMPs fight infection through several mechanisms, a fundamental process involves forming oligomers that bind to microbial surfaces and then clump together into aggregates that both prevent the pathogens from attaching to host cells and allow the AMPs to kill microbes by disrupting their cellular membranes. The synthetic A-beta preparations used in earlier studies did not include oligomers; but in the current study, oligomeric human A-beta not only showed an even stronger antimicrobial activity, its aggregation into the sorts of fibrils that form beta-amyloid plaques was seen to entrap microbes in both mouse and roundworm models.

Tanzi explains, “AMPs are known to play a role in the pathologies of a broad range of major and minor inflammatory disease; for example, LL-37, which has been our model for A-beta’s antimicrobial activities, has been implicated in several late-life diseases, including rheumatoid arthritis, lupus and atherosclerosis. The sort of dysregulation of AMP activity that can cause sustained inflammation in those conditions could contribute to the neurodegenerative actions of A-beta in Alzheimer’s disease.”

Moir adds, “Our findings raise the intriguing possibility that Alzheimer’s pathology may arise when the brain perceives itself to be under attack from invading pathogens, although further study will be required to determine whether or not a bona fide infection is involved. It does appear likely that the inflammatory pathways of the innate immune system could be potential treatment targets. If validated, our data also warrant the need for caution with therapies aimed at totally removing beta-amyloid plaques. Amyloid-based therapies aimed at dialling down but not wiping out beta-amyloid in the brain might be a better strategy.”