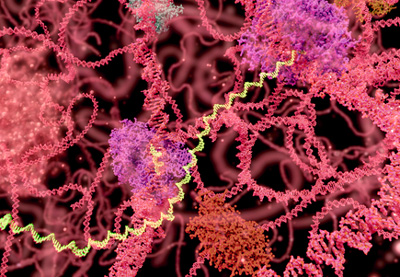 “More than 30 diseases, all of them incurable, are caused by RNA repeats,” said TSRI Professor Matthew Disney, who led the study. “By a thorough basic science investigation, we identified small molecules that target RNA base pairs precisely. We then leveraged this information to design the first drug candidate that binds to disease-causing defects in SCA10. Application of the drug candidate returns certain aspects of those cells to healthy levels – it’s like the defect is not even there.”

SCA10 is caused by a pentanucleotide repeat (a genetic sequence of five nucleotides repeated many more times than normal) affecting the mitochondria. The new drug candidate, known as 2AU-2, targets these repeats by binding to RNA base pairs.

“The potent bioactivity of 2AU-2 to moderate the structurally induced toxicity in SCA10 strongly suggests that base-pair-targeting RNA modules could have broad applicability in our effort to develop other compounds that target different RNAs,” said TSRI Research Associate Wang-Yong Yang. “More than 70 percent of RNA secondary structure is made up of base pairing.”

“We are in the process of developing tools that allow one to design small molecules to target any RNA structural motif in a complex cellular environment. That environment can contain millions of other RNAs. In this study, Wang-Yong has done an exceptional job tackling this previously-thought-to-be-impossible molecular recognition problem,” Disney said.