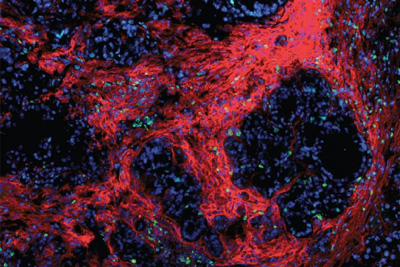 Pancreatic tumors are surrounded by a protective “nest” made of fibrotic scar tissue and the cells that manufacture it (red). CREDIT: DeNardo Lab.

Scientists at Washington University School of Medicine have shown, in mice, that immunotherapy against pancreatic cancer can be effective when given in conjunction with drugs that break up the fibrous tissue in tumours.

“Pancreatic tumours are notoriously unresponsive to both conventional chemotherapy and newer forms of immunotherapeutics,” explained David G. DeNardo, PhD, an assistant professor of medicine. “We suspect that the fibrous environment of the tumour that is typical of pancreatic cancer may be responsible for the poor response to immune therapies that have been effective in other types of cancer.”

Unlike other cancer types, pancreatic tumours are characterised by a large amount of what DeNardo describes as scar tissue. This extra connective tissue and the cells that deposit it provide a protective environment for cancer cells, stopping the immune system from attacking the tumour cells and limiting the cancer’s exposure to chemotherapy delivered through the bloodstream. DeNardo and his colleagues investigated whether some of this protection might be lost if they could disrupt the proteins that help fibrous tissue adhere to itself and surrounding cells.

“Proteins called focal adhesion kinases are known to be involved in the formation of fibrous tissue in many diseases, not just cancer,” DeNardo said. “So we hypothesised that blocking this pathway might diminish fibrosis and immunosuppression in pancreatic cancer.”

Focal adhesion kinase (FAK) inhibitors have been developed in other areas of cancer research, but DeNardo and his colleagues, including oncologist Andrea Wang-Gillam, MD, PhD, an associate professor of medicine, are the first to test them against pancreatic cancer in conjunction with immunotherapy. In the mouse study, an investigational FAK inhibitor was given in combination with a clinically approved immune therapy that activates the body’s T cells and makes tumour cells more vulnerable to attack.

Based on the study’s findings, doctors at Siteman Cancer Centre at Washington University School of Medicine and Barnes-Jewish Hospital are conducting a Phase I clinical trial in patients with advanced pancreatic cancer that will test the safety of this drug combination when given along with standard chemotherapy