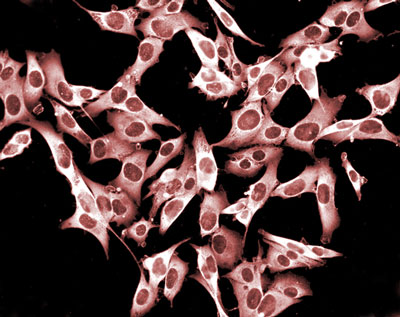 Clinical trials to test the new drugs in patients should begin as early as 2015.

Existing drugs target faulty versions of a protein called BRAF which drives about half of all melanomas, but while initially very effective, the cancers almost always become resistant to treatment within a year.

The new drugs – called panRAF inhibitors – could be effective in patients with melanoma who have developed resistance to BRAF inhibitors.

It is published in the prestigious journal Cancer Cell today (Thursday).

The researchers showed that the new drugs – provisionally named CCT196969 and CCT241161 – stopped the growth of BRAF-driven melanomas, including those that had stopped responding to currently available BRAF-targeted drugs.

In addition, the new drugs halted tumour growth in cancers in which BRAF-targeted drugs had never worked in the first place – which happens in around 20% of cases. The researchers showed that these new drugs work because they target both BRAF and the growth pathways that the cells come to rely on when they become resistant.

The studies established that for both drugs, a dose of 20mg per kg per day – which when translated to humans would be achievable by taking in pill form – caused tumours to regress without significant side-effects.

The complex research involved designing and synthesising molecules shaped to overcome major drug resistance cell signalling pathways in melanoma, testing the molecules in cultures of melanoma cells and in mice, and studying of the compounds using drug-resistant tumours from patients grown in mice.

“Melanomas often respond initially to the current generation of treatments, but they inevitably acquire resistance to them, and there is a desperate need for more effective options.

“Our new inhibitors are the first in a new family of drugs that attack cancers without allowing them the get-out clause of drug resistance, by blocking multiple cancer proteins at once. We are very hopeful that clinical trials from this series of new inhibitors will begin very soon – and that they will ultimately become new first or second-line options for patients who, at the moment, exhaust all the available treatments and end up with fatal disease.”

Study co-leader Professor Richard Marais, Director of the Cancer Research UK Manchester Institute, based at The University of Manchester, said:

“Our laboratory study showed that these new drugs deliver multiple blows to cancer by hitting several cell survival routes at once. It’s a step on from the drugs that are currently available which can’t multitask in this way.

“The next step is testing this family of drugs in clinical trials to establish that they are both safe and effective in cancer patients, potentially providing urgently-needed new treatments for patients who have run out of options. The trial is set to open soon and we await the results with great interest.”

“Malignant melanoma is the fifth most common cancer in the UK, with over 13,000 people diagnosed in 2011. Doctors already have front-line drugs to treat melanoma, but many patients gradually develop resistance to them and are left with few other treatment options. This research, which discovered how two newly developed compounds could treat drug-resistant skin cancer, may give hope to the thousands who find themselves in this situation.”