Collaborative team first to identify the perinexus in the human heart

A collaborative research team is on a quest to collapse a tiny pocket between cardiac cells, called the perinexus. 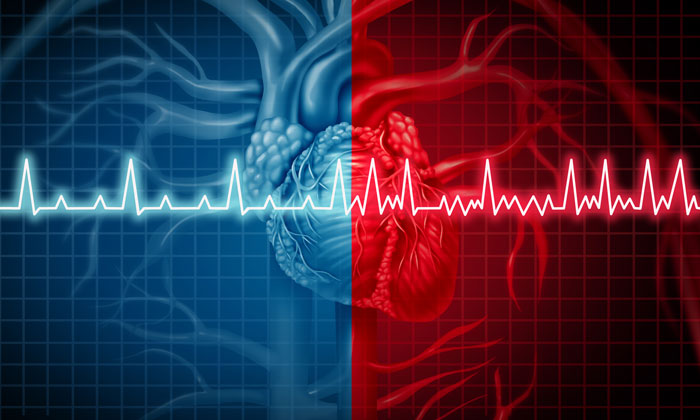 The structure spans only tenths of a millimeter – all the space it needs to disrupt a person’s heartbeat. The researchers are the first to identify the perinexus in humans. They have published their results in Frontiers in Physiology.

The research team was led by Steven Poelzing, an associate professor at the Virginia Tech Carilion Research Institute, and Soufian AlMahameed, who was a clinician associate professor at the Virginia Tech Carilion School of Medicine and the director of the Carilion Clinic’s Center for Atrial Fibrillation at the time of data collection. Currently, AlMahameed is the director of clinical electrophysiology research at Case Western Reserve MetroHealth campus in Cleveland, Ohio.

Together, Poelzing and AlMahameed designed an experiment in which they collected tissue from patients undergoing cardiac surgery and used high-resolution microscopy to examine the cells, as well as the space between them.

In the dub, the valves close and the lower chambers pump the blood out to the rest of the body. All of the cardiac cells move in a carefully choreographed dance of electrical impulses, making the heart contract at the right time, in the right order.

“We found that people who have atrial fibrillation before surgery have structural derangements outside of their cardiac cells,” said Poelzing, who is also an associate professor in the Department of Biomedical Engineering and Mechanics in the College of Engineering at Virginia Tech.

“By identifying which structure outside of the cell is deranged, we think we can target it to reduce the burden or risk of atrial fibrillation. It’s a completely new approach to treating the condition.”

The tiny pocket is right next to the gap junctions and is so small that a spark can jump across the extracellular space, continuing the contractile wave from one cell to another.

For comparison, Poelzing said the perinexus between two heart cells was like the edge of a credit card between two football fields – it’s tiny, but an important factor. The theory is, in a healthy heart, the perinexus expands and collapses as needed to maintain communication.

The researchers found that in patients with atrial fibrillation, the perinexus appears permanently expanded, and the spark can’t clear the jump.

“When the communication – whether through the gap junctions or the spark across the perinexus – is disrupted, it slows the electrical wave and increases the risk for atrial fibrillation,” Poelzing said. “If we can collapse the perinexus and keep the cells close together, the spark can jump more effectively and hopefully reduce the risk.”

Genetics and risk factors, such as aging, obesity and sleep apnea, can lead to an irregular, rapid heartbeat – typically the first symptom of atrial fibrillation, which is the most common arrhythmia. The lub-dub breaks pattern, significantly decreasing the efficiency with which the heart pumps blood.

The researchers are collaborating further to determine if pharmaceutical intervention can force a perinexal collapse and correct the irregular heartbeat.

Beyond developing new therapeutics to correct atrial fibrillation, the research is also shedding new light on the underlying mechanisms of electrical disruption in the first place, according to Sanjiv Narayan, an expert on arrhythmia who was not involved in the study. He is the co-director of the Stanford Arrhythmia Center at Stanford University, where he is also the director of the Atrial Fibrillation Program, the director of Electrophysiology Research, and a professor of medicine.

“These data support a novel concept of perinexus expansion as a potential explanation for electrical remodelling, conduction slowing and their link with increasing age, each of which is known to contribute to the epidemic of atrial fibrillation,” Narayan said.

By further understanding this mechanism, Poelzing may be able to develop a monitoring system for patients with atrial fibrillation as well.

“We might be able to examine a person’s blood chemistry to see how their salt levels are,” Poelzing said, noting that cellular communication channels are controlled via levels of sodium, potassium, and calcium. “Particular combinations of those three could cause or increase a person’s risk for miscommunication between cardiac cells. By monitoring the levels, we might be able to stop or even prevent an atrial fibrillation episode.”