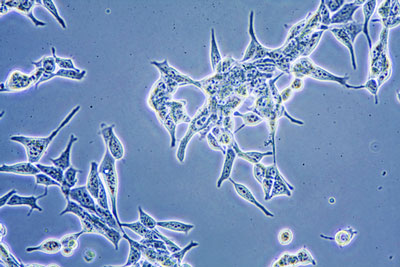 Men with prostate cancer benefit from treatment with the pioneering drug olaparib – the first cancer drug to target inherited mutations – according to the results of a major trial presented today.

Olaparib was licensed in December for women with ovarian cancer and inherited BRCA mutations, but the new research suggests it could also benefit men with genomic faults within their tumours.

Researchers told the American Association of Cancer Research (AACR) conference that up to 30 per cent of men with advanced prostate cancer had tumours with defects in repairing DNA – and these responded particularly well to olaparib. The men most likely to benefit could be identified by genetic testing to look for mutations in genes responsible for DNA repair – including the BRCA genes and the gene ATM.

In the trial, researchers monitored the response of 49 men with treatment-resistant, advanced prostate cancer to olaparib. Sixteen patients (32.7 per cent) responded to the drug, as defined by a set of clinical criteria. Olaparib stopped prostate cancer growth, generating falls in prostate specific antigen (PSA) levels, falls in circulating tumour cell counts in the blood, and radiological responses on CT scans and MRI.

The response rate was much higher in patients whose tumours carried mutations to genes involved in repairing DNA. Of the 16 patients with detectable DNA repair mutations, 14 responded to olaparib. Most of these men, who all had terminal prostate cancer with limited treatment options, had disease control lasting much longer than expected in this group of patients.

The development of olaparib, which is now owned by AstraZeneca, was underpinned by research at The Institute of Cancer Research (ICR) and clinical trials at The Royal Marsden, as well as other UK institutions.

Olaparib could become a treatment option in advanced prostate cancer

The results will lead on to the start of TOPARP-B, a second part of the trial in which only men with detectable DNA repair mutations will receive olaparib. If the results of TOPARP-A are replicated in TOPARP-B, olaparib could become a treatment option in advanced prostate cancer.

Trial chief investigator Professor Johann de Bono, Head of Drug Development at The Institute of Cancer Research, London, and The Royal Marsden NHS Foundation Trust, said: “Our trial shows that olaparib is effective in men with defects in DNA repair genes who do not necessarily have an inherited risk of cancer – and that we can pick up these defects in the clinic. This opens up the exciting possibility of delivering precise treatment for advanced prostate cancer, guided by genomic testing and based on the particular molecular characteristics of patients’ tumours.”

Dr Emma Hall, Deputy Director of the Cancer Research UK-funded Clinical Trials and Statistics Unit at The Institute of Cancer Research, London (ICR-CTSU), said: “In recent years we’ve seen a significant improvement in the length of good-quality life men can hope to live even with the most advanced prostate cancers – thanks to clinical trials giving us several new prostate cancer drugs. These encouraging results show that olaparib could be the next drug to add to those already available.”

Dr William G Nelson, Co-chair of Stand Up To Cancer and Scientific Advisory Director of the Sidney Kimmel Comprehensive Cancer Centre in Baltimore, US, said: “This is the first study to test the promise of a new kind of drug, olaparib, for life-threatening prostate cancer no longer responding to best available treatment. The results are extremely encouraging, suggesting that men with prostate cancers that contain defective DNA repair genes may benefit from olaparib treatment.”

Professor Steve Jackson, Head of Cancer Research UK Laboratories at the University of Cambridge Gurdon Institute, said: “The results from this innovative clinical trial are very promising and highlight the potential for olaparib – and other PARP inhibitors – to treat a wide range of cancers. If these new results are confirmed by further patient trials, they could soon pave the way for a much needed new treatment for late-stage prostate cancer.”