ROCK inhibitors could stop the spread of melanoma cells 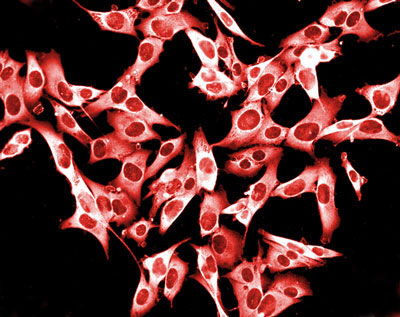 Scientists at The Institute of Cancer Research, London (ICR) have found that drugs which block the activity of the ROCK group of proteins dramatically reduced the ability of melanoma cells to move through tissue.

The ROCK inhibitors stopped cells from employing two different types of movement they use to metastasise, or spread through the body, compared with other drugs that cannot block both forms of movement.

Scientists found the inhibitors slowed tumour growth in mice with melanoma – the most serious form of skin cancer – and limited spread in the lungs. Their study shows ROCK inhibitors could be effective at stopping cancers spreading to other parts of the body – the most common way cancer kills patients.

The study is published in the journal Cancer Research and was funded by Cancer Research UK, with additional support from a Marie Curie Intra-European Fellowship. It was a collaboration between researchers from a range of disciplines, including cancer biologists Professor Chris Marshall and Dr Amine Sadok, and chemist Professor Ian Collins.

ROCK proteins are thought to be key to the invasion of cancer cells into new tissue, and can be blocked by two experimental drugs discovered at the ICR called AT13148 and CCT129254. These drugs were found to efficiently block ROCK activity in melanoma cells and caused the cancer cells to collapse, which they also saw when genes producing ROCK proteins had been genetically deleted from the cells.

Treatment with other drugs that inhibit ROCK didn’t stop cancer cells moving because they caused the cells to change shape, switching from rounded amoeboid-like cellular movement, to elongated, protrusive movement to invade tissue. But the two new drugs prevented both types of movement because they caused more profound inhibition of ROCK.

One of the drugs, CCT129254, was tested in mice with melanoma and was found not only to stop cellular movement, but also to slow tumour growth, showing that ROCK is not only required for tumour spread but also growth at the site of spread.

Study leader Professor Chris Marshall, Joint Head of the Division of Cancer Biology at the ICR, said: “This study is a great example of team science, with biologists and chemists working together to provide new approaches to treatment. We have shown that drugs discovered here at the ICR can block one of cancer’s most lethal traits, by stopping cancer cells from spreading into surrounding tissues.

“Cancer cells are very adept at invading new tissues because individual cancer cells switch between types of movement. Our study has shown that these new ROCK inhibitors can block all cell movement, and so could be an effective treatment to stop tumour spread and growth at secondary sites.”