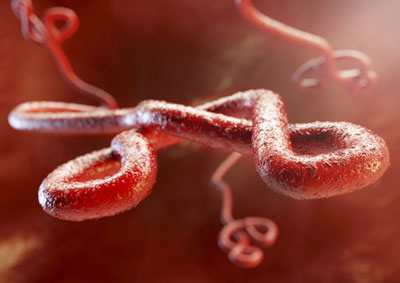 An international team of scientists has identified the molecular “lock” that the deadly Ebola virus must pick to gain entry to cells.

The findings suggest that drugs blocking entry to this lock could protect against Ebola infection. The researchers found that the Ebola virus cannot infect cells unless it first attaches to a host protein called Niemann-Pick C1 (NPC1) in membrane compartments called lysosomes deep within cells.

“Our study reveals NPC1 to be an Achilles’ heel for Ebola virus infection,” said co-study leader Kartik Chandran, Ph.D., associate professor of microbiology and immunology and the Harold and Muriel Block Faculty Scholar in Virology at Albert Einstein College of Medicine of Yeshiva University (Einstein). “Mice lacking both copies of the NPC1 gene, and therefore devoid of the NPC1 protein, were completely resistant to infection.”

Ebola virus binds to the host cell’s outer membrane, and a portion of host cell membrane then surrounds the virus and pinches off, creating an endosome—a membrane-bound bubble inside the cell. Endosomes carry their viral stowaways deep within the cell and eventually mature into lysosomes—tiny enzyme-filled structures that digest and recycle cellular components.

The viruses captive in the lysosome manage to escape destruction by exploiting components of the cell to gain entry to the cytoplasm, the substance between the cell membrane and the nucleus where the virus can replicate. But the identities of many of these components have remained unknown.

In an earlier study, Einstein and US Army Medical Research Institute of Infectious Diseases (USAMRIID) researchers, together with colleagues at the Netherlands Cancer Institute and Harvard Medical School, found evidence, in tissue culture, that Ebola takes advantage of the NPC1 protein to enter the cell’s cytoplasm. NPC1 is embedded within cell membranes, where it helps transport cholesterol within the cell. People lacking NPC1 due to genetic mutations develop a fatal neurodegenerative disorder called Niemann-Pick disease, in which cells become clogged with cholesterol and eventually die.

Mice lacking both copies of NPC1 were completely protected against Ebola

The current animal study was aimed at confirming whether NPC1 is essential for Ebola infectivity. The researchers challenged both “wild type” mice (which have two intact copies of the NPC1 gene) and “knockout mice” (lacking both copies of the gene) with Ebola virus. “While the wild type mice succumbed to the infection, the knockout mice were entirely free of virus replication and completely protected against the disease,” said Dr Stephen Walkley, professor of Dominick P. Purpura Department of Neuroscience, of pathology, and of the Saul R. Korey Department of Neurology at Einstein.

Even though such a treatment in humans would also block the cholesterol transport pathway, “We think patients would be able to tolerate the treatment, which would be needed for only a short time,” said Andrew S. Herbert, Ph.D., senior research scientist in the Viral Immunology Branch at USAMRIID, and co-first author of the study.

“Carrier” mice—those with just one working copy of NPC1 and therefore possessing half the normal complement of NPC1 receptors—proved substantially but not totally resistant to Ebola infection. “This would suggest that drugs that interfere with Ebola’s interaction with NPC1—even if some Ebola viruses are able to enter cells—could probably still provide some benefit from lethal infection,” said Dr John M. Dye, Ph.D., Branch Chief of Viral Immunology at USAMRIID.

“Ideally,” Dr. Chandran said, “future research in humans, based on these findings, will lead to the development of antiviral drugs that can effectively target NPC1 and prevent infection not just by Ebola, but also by other highly virulent filoviruses, which also require NPC1 as a receptor.”