Scientists have identified an enzyme, LOX, that possibly holds the key to preventing secondary cancers in breast cancer patients… 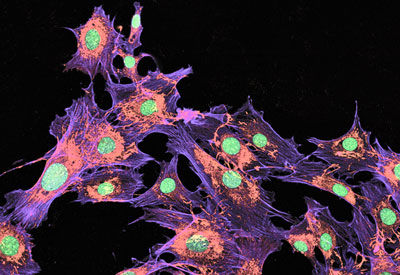 Scientists from the University of Sheffield and University of Copenhagen have identified a possible key to preventing secondary cancers in breast cancer patients, after discovering an enzyme, LysYl Oxidase (LOX), which enhances the spread of the disease.

Metastatic breast cancer is the main cause of the 12,000 deaths which occur from breast cancer in the UK every year. The most common site for the disease to spread is the bone.

The new research found that LOX released from the primary tumour causes holes in bone and prepares the bone for the future arrival of cancer cells. This suggests that identifying LOX in oestrogen receptor negative (ER negative) breast cancer patients early, could allow doctors to block the enzyme’s activity, preventing bone damage and the spread of tumour cells to the bone, halting the progression of the disease.

The researchers also showed that treatment with bisphosphonate, an existing class of drug which prevents the loss of bone mass and is already used to treat diseases such as osteoporosis, was able to prevent the changes in the bone and the spread of the disease in mice.

The pioneering research, co-led by Dr Alison Gartland at the University of Sheffield’s Department of Human Metabolism, could lead to a better prognosis for cancer patients in the longer term.

Dr Gartland said, “This is important progress in the fight against breast cancer metastasis and these findings could lead to new treatments to stop secondary breast tumours growing in the bone, increasing the chances of survival for thousands of patients.

“We are really excited about our results that show breast cancer tumours send out signals to destroy the bone before cancer cells get there in order to prepare the bone for the cancer cells’ arrival.

“The next step is to find out exactly how the tumour secreted LOX interacts with bone cells to be able to develop new drugs to stop the formation of the bone lesions and cancer metastasis. This could also have implications for how we treat other bone diseases too.”

Study co-leader Dr Janine Erler, Associate Professor at the Biotech Research & Innovation Centre (BRIC) at the University of Copenhagen, said, “Once cancer spreads to the bone it is very difficult to treat.

“Our research has shed light on the way breast cancer cells prime the bone so it is ready for their arrival. If we were able to block this process and translate our work to the clinic, we could stop breast cancer in its tracks thereby extending patients’ lives.”

Katherine Woods, Senior Research Communications Manager at Breast Cancer Campaign and Breakthrough Breast Cancer, said, “By unveiling the role that the protein LOX is playing, these results open up a whole new avenue for research and treatments that could stop breast cancer spreading to the bone. The research also adds weight to the growing body of evidence supporting the role of bisphosphonates in stopping secondary breast cancer in its tracks.

“The reality of living with secondary breast cancer in the bone is a stark one, which leaves many women with bone pain and fractures that need extensive surgery just when they need to be making the most of the time they have left with friends and family.”