A powerful 9.4-Tesla MRI that provides the most detailed images of the brain to date shows that brain cell density remains constant with age… 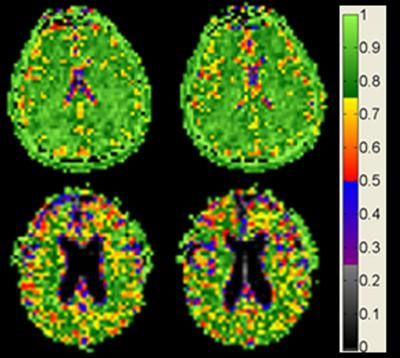 New, ultra-high-field magnetic resonance images (MRI) of the brain provide the most detailed images to date to show that while the brain shrinks with age, brain cell density remains constant.

The study, of cognitively normal young and old adults, was led by researchers at the University of Illinois at Chicago (UIC) and published in the journal NMR in Biomedicine.

The images provide the first evidence that in normal aging, cell density is preserved throughout the brain, not just in specific regions. The findings also suggest that the maintenance of brain cell density may protect against cognitive impairment as the brain gradually shrinks in normal aging.

The 9.4-Tesla MRI is three times stronger than that of a typical MRI machine

The images were made at UIC by a powerful 9.4-Tesla MRI, the first of its kind for human imaging. The 9.4 T magnetic field is more than three times stronger than that of a typical MRI machine and is currently approved only for research. The strongest MRI units approved for clinical use are 3 T.

‘The information provided by these 9.4-Tesla scans may be very useful in helping us to detect tiny losses of brain cells and the reduction in cell density that characterises the early stages of neurodegenerative diseases that can take decades to develop before symptoms appear, like Alzheimer’s disease,’ said Dr Keith Thulborn, director of MRI research in the UIC College of Medicine and lead author of the report.

“If we can identify when Alzheimer’s pathology starts, the efficacy of new drugs or other interventions to slow or prevent Alzheimer’s disease can be tested and monitored when the disease starts, instead of after it’s developed for 20 or 30 years and becomes clinically apparent,” said Thulborn, who is professor of radiology, physiology and biophysics.

Neuroscientists have long known that the brain shrinks with age, but for a long time they thought the loss in volume was associated with a loss of brain cells. That was disproven by studies that showed it is the neurons themselves that shrink while the number of cells remains the same in normal older adults.

Thulborn and his colleagues scanned the brains of 49 cognitively normal adults ranging in age from 21 to 80. All had at least a college education and were employed or, if retired, were active in their communities. All were without major medical, neurological or psychiatric disease and scored within the normal range for mental status.

The 9.4 Tesla MRI measures sodium ions, which are less concentrated by several orders of magnitude than the fat and water molecules detected with standard MRI. Sodium ions are present throughout the body and are pumped in and out of neurons to generate the electric potentials needed to spark nerve impulses. Sodium concentrations in the brain reflect neuron density. Areas of low sodium concentration indicate lots of neurons packed tightly together, while higher sodium concentration can indicate more space between cells — or the loss of cells, as in the case of neurodegenerative diseases.

Thulborn thinks the ultra-high-field scanners eventually will be approved for clinical use.

“We can use the 9.4 T to look at brain cell loss in real time in patients experiencing stroke, or to see whether chemotherapy for brain tumors is working in higher resolution that is just not available using the current 3 T clinical scanners,” he said.