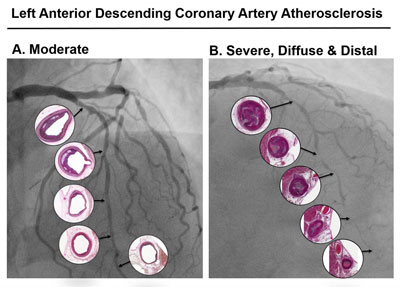 Researchers at the University of North Carolina School of Medicine have created a first-of-its-kind animal model to pinpoint two biomarkers that are elevated in the most severe form of heart disease.

“If these correlations were also found in insulin resistant humans, then we would want to do everything we could to treat them because they would be at a very high risk of developing severe cardiovascular disease,” said Timothy Nichols, MD, Professor of medicine and pathology.

Interestingly, Nichols and his colleagues did not set out to pinpoint the two key biomarkers. They wanted to create an insulin resistant animal model that mimicked human heart disease. They chose pigs, which are metabolically similar to humans and have hearts very much like human hearts. By feeding the animals a diet high in fat and salt over the course of a year, all the pigs became insulin resistant. That is, their bodies produced a lot of insulin but their cells did not respond to the hormone as well as normal. All the pigs also developed coronary and aortic atherosclerosis – a condition where arteries become clogged up by fatty substances known as plaques. But only about half of the pigs developed the most severe form of the disease.

When the researchers checked the pigs for high levels of insulin resistance, they found no correlation with the most severe atherosclerosis. This was a surprising and unexpected finding.

14 of the 20 pigs that developed severe atherosclerosis were females

David Clemmons, MD, the Sarah Graham Kenan Professor of Medicine and Professor of biochemistry and biophysics, knew that the scientific literature suggested a correlation between atherosclerosis and glycated proteins – proteins bonded with sugars in blood.

Clemmons found a study from Finland published in 2005 showing that elevated glycated protein levels were strongly associated with advanced heart disease and increased mortality in women but not in men.

“The underlying causes of this correlation are unknown,” Clemmons said. “But now we have a unique animal model that very much mimics what we see in humans. Our model is a good predictor of diet-induced atherosclerosis in females.”

The study findings are published in PLOS ONE.