New insights into biofilm formation could lead to better therapies

Researchers have now shown that a “messenger molecule” produced by P. aeruginosa encourage bacteria to colonise catheters, forming a biofilm… 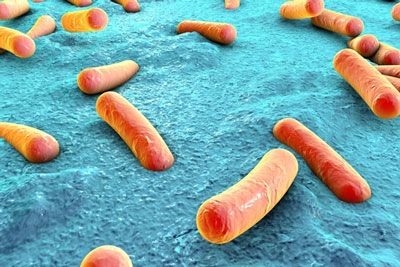 Biofilms are tough, opportunistic, highly antibiotic resistant bacterial coatings that form on catheters and on medical devices implanted within the body.

University of Maryland investigators have now shown that a “messenger molecule” produced by the opportunistic human pathogen, Pseudomonas aeruginosa, encourages bacteria to colonise catheters in the bladders of laboratory mice, where they form biofilms.

Normally, in the absence of the kinds of surfaces that encourage biofilm formation, there are few bacteria in either the bladder or the kidneys. Previously, it has been shown that the messenger molecule, cyclic-di-GMP (c-di-GMP) promotes biofilm formation when such surfaces are present.

In the current study, the investigators inserted tiny catheters into the mice’s bladders—a surface on which to grow biofilms. They then infected the mice with P. aeruginosa via those same catheters.

“Although the detection method did not distinguish between free-living bacteria and those in biofilms, it is safe to assume, from previous research, that the bacteria being detected were largely in biofilms,” said Vincent T. Lee, Associate Profressor, Department of Cell Biology and Molecular Genetics, University of Maryland.

One mystery remains. In test tube studies (as opposed to studies in animals), c-di-GMP influences biofilm formation by acting on various targets—bacterial pili and flagella, organelles involved in locomotion, and extracellular polysaccharide, a part of the bacterial surface which helps the bacterial cells stick together in a biofilm.

However, in the current study, when the investigators used mutant bacteria that could not make functional pili and flagella, the bacteria could still infect the mice. The same was true in the earlier study, with respect to the extracellular polysaccharide. Thus, said Lee, c-di-GMP must be influencing biofilm formation by acting on some other, as yet unknown target.

Discovering exactly what that target is could be very helpful to certain medical patients.

The study findings are published in the Journal of Bacteriology.