Johns Hopkins researchers have identified a novel cell signalling pathway in mice through which mammals can regenerate hair and skin while healing from wounds. The discovery, summarised in an article published on 6th August in the journal Cell Stem Cell, could, they say, eventually help spur the growth of new hair, skin or other organ […] 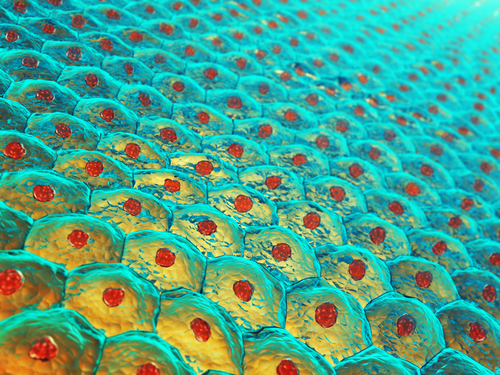 Johns Hopkins researchers have identified a novel cell signalling pathway in mice through which mammals can regenerate hair and skin while healing from wounds.

The discovery, summarised in an article published on 6th August in the journal Cell Stem Cell, could, they say, eventually help spur the growth of new hair, skin or other organ tissue in scarred victims of burns and other injuries.

Our study “uncovers a novel role for a protein that works as a master regulator of regeneration in the skin,” says senior study author Luis A. Garza, M.D., Ph.D., associate professor of dermatology at the Johns Hopkins University School of Medicine. “Medications that turn on this protein have the powerful potential to decrease scarring as healing of wounds takes place, thereby promoting skin and hair follicle regeneration.”

Garza says the team’s work is based on the knowledge that damaged skin releases  double-stranded RNA (dsRNA), genetic information normally carried by some viruses, that is sensed by a protein called toll-like receptor 3 (TLR3). TLR3, which in other contexts plays a fundamental role in recognising some disease-causing organisms and activating the immune system, during wounding also activates the genes IL6 and STAT3 to promote hair follicle regeneration.

TLR3 also activates other molecules involved in hair development, including the Wnt and Shh signalling pathways and a gene called EDAR, which makes the protein ectodysplasin and plays an important role in skin development.

Developing embryos have all of the instructions they need to make organs and skin in genetic material within the cells, says Garza. Advanced knowledge about this pathway may lead to therapies that reactivate these early developmental signals to promote healing.

“A lot of human disability is from scarring,” Garza says. “After a heart attack, we’re really good at replacing the blood flow, but it’s the scar on the heart afterward that’s the real problem. We and others in the field of regenerative medicine are interested in how to enhance or trigger regeneration in such situations.”

For the study, Garza and colleagues compared the protein expression of certain genes in healed wounds in two groups of mice. One group was genetically proficient in wound-induced hair neogenesis, a process in mice and rabbits in which skin and hair follicles regenerate after wounds. The other inbred group of mice was noted to lack this ability. Expression of TLR3 was three times higher in the mice that were better able to regenerate hair.

In other experiments, the team found that the expression of TLR3 was five times higher in scratched human skin cell samples compared to healthy skin cell samples, that adding synthetic dsRNA to mouse skin wounds led to a greater number of regenerated follicles, that adding a substance that breaks up dsRNA decreased the number of regenerated follicles, and that regeneration was nearly abolished in mice deficient in TLR3.

Garza notes that it has long been known that skin damage can trigger regeneration. Several cosmetic dermatological procedures, such as chemical peels, dermabrasion and laser treatments, have been used to do that for decades: “One implication from our work is that all of those different rejuvenation techniques are likely working through dsRNA pathways. It may also be that dsRNA could be directly used to stimulate rejuvenation in aging or hair follicle growth in burn patients to regain structures that have been lost.”

The clinical translation of this work is promising because work has already started, says Garza. Drug companies are already developing products to activate TLR3 to trigger the immune system, and these same products could be tested to promote regeneration. But Garza cautions that clinical applications of the team’s discoveries must await many more experiments and the development and testing of drugs that target the pathway they uncovered. He also made clear that the information might not be as applicable to conditions unrelated to scarring or to those whose hair follicles are lost from male pattern baldness.