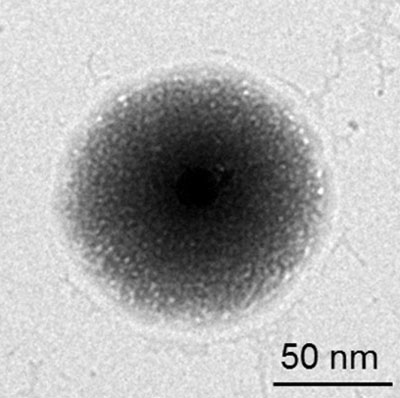 This is a transmission electron microscope image of the drug delivery system. Black is the synthetic core nanogel, the outside shell is the platelet membrane. CREDIT: Quanyin Hu

Researchers from North Carolina State University (NCSU) have developed a technique that coats anticancer drugs in membranes made from a patient’s own platelets.

The technique allows the drugs to last longer in the body and attack both primary cancer tumours and the circulating tumour cells that can cause a cancer to metastasise.

“There are two key advantages to using platelet membranes to coat anticancer drugs,” says Zhen Gu, assistant professor in the joint biomedical engineering programme at North Carolina State University and the University of North Carolina at Chapel Hill. “First, the surface of cancer cells has an affinity for platelets – they stick to each other. Second, because the platelets come from the patient’s own body, the drug carriers aren’t identified as foreign objects, so last longer in the bloodstream.”

“This combination of features means that the drugs can not only attack the main tumour site, but are more likely to find and attach themselves to tumour cells circulating in the bloodstream – essentially attacking new tumours before they start,” says Quanyin Hu, a Ph.D. student in the joint biomedical engineering programme.

Blood was taken from a patient – a lab mouse in the case of this research – and the platelets were collected from that blood. The isolated platelets were treated to extract the platelet membranes, which were then placed in a solution with a nanoscale gel containing the anticancer drug doxorubicin (Dox), which attacks the nucleus of a cancer cell. The solution is compressed, forcing the gel through the membranes and creating nanoscale spheres made up of platelet membranes with Dox-gel cores. These spheres are then treated so that their surfaces are coated with the anticancer drug TRAIL, which is most effective at attacking the cell membranes of cancer cells.

When released into a patient’s bloodstream, these pseudo-platelets can circulate for up to 30 hours – as compared to approximately six hours for the nanoscale vehicles without the coating.

“We’d like to do additional preclinical testing on this technique,” Gu says. “And we think it could be used to deliver other drugs, such as those targeting cardiovascular disease, in which the platelet membrane could help us target relevant sites in the body.”