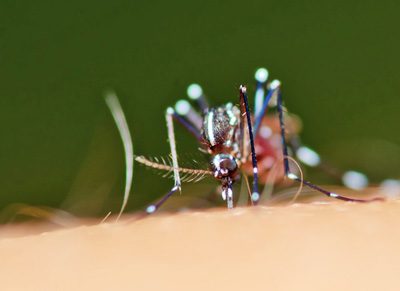 The Institut Pasteur in French Guiana has sequenced the complete genome of the Zika virus, which is responsible for an unprecedented epidemic currently sweeping through the tropical regions of the Americas.

The analysis of this sequence shows almost complete homology with the strains responsible for the epidemic that occurred in the Pacific in 2013 and 2014.

Last November, following a request by colleagues in Suriname, the team from the Virology Laboratory at the Institut Pasteur in French Guiana confirmed the first five indigenous cases of infection by the Zika virus in Suriname. Researchers from the Institut Pasteur in French Guiana have just mapped the complete genome sequence of this viral strain using one of these five samples. The analysis of this genome shows that it belongs to the Asian lineage and presents over 99% homology with the strain responsible for the epidemic in French Polynesia in 2013.

“Until now few complete sequences of this virus and none of the strains currently circulating in South and Central America were available. This complete sequence of the virus is a major starting point for shedding light on how its behaviour develops”, points out Dominique Rousset, Head of the Virology Laboratory and National Reference Centre for Arboviruses at the Institut Pasteur in French Guiana.

Zika virus is a mosquito-borne virus

Zika virus is an emerging mosquito-borne virus that was first identified in Uganda in 1947 in rhesus monkeys through a monitoring network of sylvatic yellow fever. It was subsequently identified in humans in 1952 in Uganda and the United Republic of Tanzania. Outbreaks of Zika virus disease have been recorded in Africa, the Americas, Asia and the Pacific. The first cases of the current epidemic were confirmed in Brazil in May 2015 and the country is currently experiencing the largest epidemic ever recorded with 440,000 to 1,300,000 suspected cases reported by the Brazilian health authorities.

The Zika virus has spread quickly, affecting 10 countries in the tropical regions of the Americas as well as the Caribbean so far. While until recently the infection was considered harmless, the Zika virus epidemic which raged in French Polynesia and the Pacific in 2013-2014 was accompanied by an increase in serious neurological complications, such as Guillain-Barre syndrome and congenital neurological defects. In Brazil, the very significant increase in the number of microcephaly cases in foetuses whose mothers were infected during pregnancy forced the government to declare a state of emergency in December 2015.

“Are these defects caused by the Zika virus alone, the co-circulation of other infectious agents or other factors? Multidisciplinary research projects will need to be set up to answer these questions. We are already trying to improve our knowledge of this virus and understand its development, primarily by building on diagnostic tools” explains Dominique Rousset.

“We are committed to supporting vector control by monitoring resistance to insecticides, as part of an agreement with the Regional Health Agency. Research into the impact of this resistance on the vectorial competence of Aedes aegypti populations for various arboviruses, including the Zika virus, is also being conducted at the Vectopole”, adds Isabelle Dusfour, entomologist at the Institut Pasteur in French Guiana.

One response to “Institut Pasteur sequences genome of the Zika virus”