Here, Dr John Maher of the NIHR BRC at Guy’s and St Thomas’ and Kings College London discusses CAR T-cell therapy and the exciting frontier the technique has opened up in the battle against cancer… 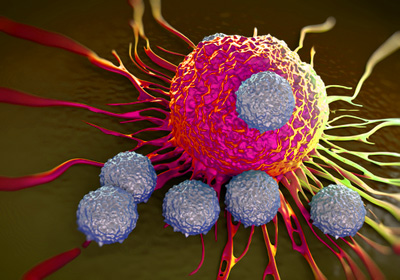 In recent years, the emergence of highly promising immunotherapies, treatments that boost the body’s immune system enabling it to better combat cancer, have caused a great deal of excitement within the scientific community and beyond.

The development of these therapies has opened up the possibility of new treatment options for patients, especially those who have cancerous tumours that are inoperable, recurrent or which have spread to other parts of the body.

One particularly interesting immunotherapy involves genetically engineering a patient’s own T-cells, a type of white blood cell that orchestrates the body’s immune response, so that it can produce special proteins called Chimeric Antigen Receptors (CARs) which enable the T-cells to identify and destroy cancerous cells.

Typically, T-cells are very effective at identifying and destroying infected cells, but without the specific targeting ability the CARs give them they are not very good at recognising and attacking cancerous cells.

Findings from the clinical trials that have tested the CAR T-cell technique in patients with acute leukaemia have been extremely promising. The results are especially encouraging because several different American centres have used slight modifications of the CAR approach, and yet all have reported highly impressive and broadly similar efficacy data.

It’s no surprise that the majority of trials in this field have focused on treating blood cancers, particularly certain types of leukaemia, because CAR T-cell technology uses a blood cell to target another blood cell.

The next important step, and the focus of my work at the NIHR Biomedical Research Centre at Guy’s and St Thomas’ NHS Foundation Trust and Kings College London, is to test the efficacy of the CAR technique for treating solid cancers, which account for 90 per cent of all cancers and which can be much more difficult to eliminate.

In an ongoing first-in-man trial in patients with head and neck cancer, we are injecting the CAR T-cells directly into tumours in order to maximise effectiveness and minimise the side effects. As the trial proceeds, we will gradually increase the dose of CAR T-cells which will allow us to understand what the maximum safe dose is, as well as providing us with a preliminary assessment of the effectiveness of this therapy.

As with other interventions of this kind there are some potentially serious side effects. For instance, many of the patients with acute leukaemia that have been treated with their own CAR T-cells have developed a side effect known as a cytokine storm.

Cytokines are small proteins that play a vital role in co-ordinating activities of the immune system. They are released in great numbers when the CAR T-cells encounter malignant cancer cells and become highly activated causing the patient to experience extreme flu-like symptoms.

Managing this kind of toxicity risk is a key challenge during the early stages of development for any new therapy and especially important when treating elderly or frail patients who are less able to fight this kind of aggressive immune response.

While some scientists believe that cytokine storms may be essential for the therapy to work properly, it’s clear that there is a great deal more research needed before we fully understand what role the body’s biological responses such play so that we can ensure patient safety.

Another key issue for the widespread adoption of CAR T-cell therapy will be how to roll it out at scale. This model of delivery is very expensive and completely different from traditional pharmaceutical approaches because it requires the creation of a highly personalised product for each patient.

These are just two of the challenges that we will face as we continue our research in this area. It will be some time before CAR T-cell therapy is widely available as a treatment option for patients, but the development of this technique has opened up a very exciting frontier in our ongoing battle against cancer.