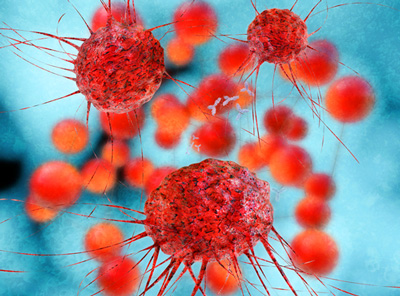 Two forms of a peptide derived from a naturally-occurring human protein can force tumours to shrink significantly in an animal model of metastatic ovarian cancer, according to new research.

The peptides, dubbed psaptides, stimulate a response that targets tumour cells directly and also acts on the healthy tissues to make tumours’ microenvironment inhospitable to metastasis. The findings suggest that psaptides could serve as a promising template for the development of treatment options directed against ovarian and maybe other cancers.

Ovarian tumours are often clinically silent until they have spread; as a result, many women with ovarian cancer are not diagnosed until the disease has already advanced. Surgery and chemotherapy with taxanes and platinum agents are the most common therapies, but ovarian cancer cells often develop resistance to these drugs, leaving women with advanced disease few therapeutic options.

“Our goal is to develop treatments that that will cure people without making them more ill,” Randolph Watnick, PhD, Boston Children’s Hospital, said. “We want to find way to treat people with cancer without having to rely on cocktails of cytotoxic drugs that have significant side effects.”

For the last dozen years, Randolph Watnick, PhD, Boston Children’s Hospital, and his laboratory has pursued that goal by attempting to understand and manipulate the microenvironment in which tumours, in particular metastatic tumours, grow and thrive. In 2009, they announced that a protein called prosaposin (psap) could block metastasis in animal models of breast and prostate cancer. Prosaposin stimulates immune cells called monocytes to produce thrombospondin-1 (TSP-1), a potent anti-angiogenic and anti-inflammatory protein that makes otherwise-permissive tissues resistant to metastasis.

Together with collaborators, in 2013 Watnick showed that psaptide, a five-amino acid fragment of prosaposin, is fully capable of triggering TSP-1 production and could significantly reduce metastatic spread in mouse models of prostate, breast and lung cancer.

In the current study, the researchers sought to determine whether two modified versions of psaptide, D-psaptide and cyclopsaptide, could, via TSP-1, force established metastatic tumours to regress. D-psaptide replaces two of psaptide’s amino acids with D-amino acids (mirror images of normal amino acids, which the body does not break down as readily). Cyclopsaptide is a cyclic version of D-psaptide. D-psaptide and cyclopsaptide are three and six times more potent, respectively, at stimulating TSP-1 release than native psaptide, the team found, and are also significantly more stable in human plasma.

“Essentially, we’re using the prosaposin peptides as immunomodulators by getting them to turn monocytes into delivery vehicles to get TSP-1 to ovarian tumours,” Watnick explained. “This strategy should work without interfering with any immune response directed specifically against the tumour.”

Tumours were undetectable in D-psaptide-treated animals

In one set of experiments, mice received daily treatment with cisplatin or D-psaptide for up to 83 days. In a second set, the tumours were allowed to establish themselves for a longer period of time and then were treated daily with either cisplatin or cyclopsaptide and followed for a shorter period of time (15 days) to allow close examination of any remaining tumour.

The results were striking. In the cisplatin/D-psaptide comparisons, tumours regressed in mice treated with cisplatin until about day 20, at which point they became resistant and started growing again. Tumours in D-psaptide-treated animals, by contrast, regressed to the point where by day 48 they were undetectable, and remained so until the end of the experiment 35 days later.