Posted: 1 May 2016 | Victoria White, Digital Content Producer | No comments yet 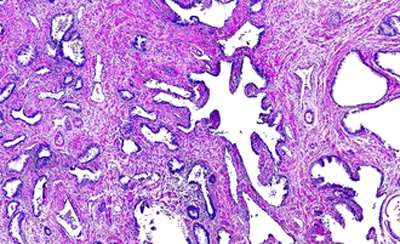 Men with aggressive prostate cancer that has stopped responding to conventional treatment could potentially benefit from a new class of cancer drug designed to overcome drug resistance, a new study suggests.

Researchers found that Hsp90 inhibitors specifically target and inactivate a mechanism commonly used by prostate cancer cells to evade the effects of standard treatment. The findings provide vital information about the role of Hsp90 in drug-resistant prostate cancers, and open up potential new routes to cancer treatment based on blocking this or related proteins.

A team at The Institute of Cancer Research, London, found that Hsp90 inhibitors countered the effect of malfunctions in the androgen receptor, which often occur in resistance to hormone treatments.

The research suggests that Hsp90 inhibitors could be effective in prostate cancers that have become resistant to treatment and started spreading round the body.

Hsp90 inhibitors are among several innovative new types of treatment designed to attack cancer indirectly, by destabilising multiple different proteins required for the growth and survival of cancer cells. By destroying several cancer signals at once, they are designed to make it hard for cancers to escape the effects of treatment, giving them promise as potential ‘resistance-busting’ drugs.

The new research found that on top of their known effects on cancer, Hsp90 inhibition also blocked production of abnormal forms of the androgen receptor, stripping cancer cells of their defences against hormone treatments.

Prostate tumours rely androgens to grow and spread, and blocking androgen receptors can be an effective treatment. However, cancer cells often generate abnormal forms of the androgen receptor that can be switched on all the time without the need for androgen hormone stimulation.

Researchers investigated the effect of Hsp90 inhibition on human cancer cells that produced the most common androgen receptor variant, called AR-V7. They grew the cancer cells in the lab and injected them into mice.

The researchers showed that Hsp90 inhibition reduced production of AR-V7 through a new and unexpected mechanism of action – by changing the way that messenger RNA molecules carrying the code for AR-V7 are processed. Hsp90 inhibition also reduced the levels of the normal androgen receptor, and other important prostate cancer molecules called AKT and GR.

Commenting on the research, Study co-leader Professor Paul Workman, Chief Executive of The Institute of Cancer Research, London, said: “We call Hsp90 inhibitors ‘network drugs’ because they tackle several of the signals that are hijacked in cancer all at once, across a network rather than just a single signalling pathway. These drugs can hit cancer harder than those targeting only one protein, and look promising for preventing or overcoming drug resistance.

“Our study has found that Hsp90 inhibition can specifically stop resistance to hormone treatments in prostate cancer, through a completely new mechanism of action involving the processing of messenger RNA.”

The Institute of Cancer Research (ICR)