In laboratory tests on human cells and mouse models, an experimental therapy was shown to stop treatment-resistant glioblastoma and high-grade gliomas… 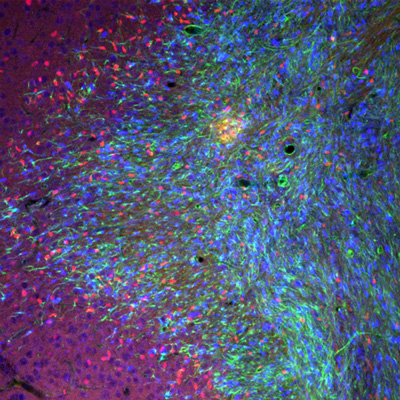 In laboratory tests on human cells and mouse models, an experimental therapy has been shown to stop aggressive, treatment-resistant glioblastoma and high-grade gliomas.

Testing a multi-step therapeutic strategy, the scientists, led by researchers from Cincinnati Children’s Hospital Medical Centre, found a way to use a gene therapy to shut down a gene long-implicated in the formation of high-grade gliomas called Olig2. The protein encoded by Olig2 is expressed in the majority of gliomas. Removing the Olig2 gene halts tumour growth, while elimination of Olig2-producing cells blocks tumour formation.

“We find that elimination of dividing Olig2-expressing cells blocks initiation and progression of glioma in animal models and further show that Olig2 is the molecular arbiter of genetic adaptability that makes high-grade gliomas aggressive and treatment resistant,” said Qing Richard Lu, PhD, lead investigator and scientific director of the Brain Tumour Centre at Cincinnati Children’s. “By finding a way to inhibit Olig2 in tumour forming cells, we were able to change the tumour cells’ makeup and sensitise them to targeted molecular treatment. This suggests a proof of principle for stratified therapy in distinct subtypes of malignant gliomas.”

Olig2 contributes to the transformation of normal precursor cells into abnormal malignant cells that divide uncontrollably. In the context of cancer cell formation, the researchers saw Olig2 drive molecular processes that allow forming glioma cells to be highly adaptable and susceptible to the tumour-promoting effects of additional genetic changes.

Researchers then decided to eliminate Olig2-positive dividing cells during tumour formation. To use an approach more rapidly translatable from the laboratory bench to clinical bedside, they successfully tested a gene therapy that uses an engineered herpes simplex virus to deliver a suicide gene into replicating Olig2-positive cancer cells. They next administered an anti-herpes drug already in clinical use, ganciclovir (GCV). The Olig2-deleted tumours were not able to grow.

EGFR is a common and effective target for chemotherapy drugs used clinically to treat tumours such as breast cancers. In repeated tests in mouse models, Olig2 inhibition prompted the glioma-forming cells to transform into EGFR-expressing astrocyte-like cells. Then, in subsequent and repeated testing on the transformed human and mouse model astrocyte-like cancer cells, the researchers treated the cells with an EGFR-targeted chemotherapy drug called gefitinib. The treatment stopped the growth of new tumour cells and tumour expansion.

Dr Lu said that with additional testing, verification and refinement the experimental therapy could be especially helpful in preventing a recurrence of brain cancer in patients who have undergone an initial round of successful treatment. He added the new treatment approach would likely be used in combination with other existing therapies like radiation, surgery, other chemotherapies and targeted molecular treatments.