University of Leicester gets funding to develop bacteriophages

Posted: 27 May 2016 | Victoria White, Digital Content Producer | No comments yet 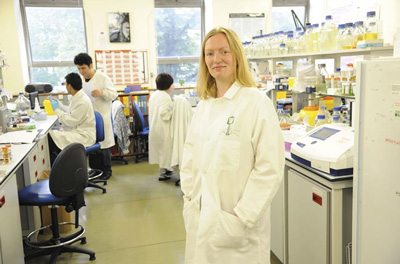 A University of Leicester researcher has been awarded funding to develop bacteriophages to target bacterial infant diarrhoea in the developing world.

The University of Leicester is a Grand Challenges Explorations winner, an initiative funded by the Bill & Melinda Gates Foundation.  Professor Martha Clokie, of the Department of Infection, Immunity and Inflammation at the University of Leicester, will pursue an innovative global health and development research project, titled ‘Developing bacteriophages to eradicate infant Shigella’.

To receive funding, Professor Clokie and other Grand Challenges Explorations winners demonstrated in a two-page online application a bold idea in one of five critical global heath and development topic areas. The foundation will be accepting applications for the next GCE round in September 2016.

Professor Clokie is a bacteriophage biologist at the University and much of her work focuses on the fundamental science needed to underpin the development of phages as novel therapeutics to treat bacteria that are difficult to treat using conventional antibiotics.

“Key questions in using phages for treatment or manipulation purposes, is how good are specific phages at removing the bacteria that we intend them to eliminate, and how do they alter the ‘resident’ microbes associated with guts?”

Bringing together a multidisciplinary team

Professor Clokie will be joined by a number of experts from around the world to work on the project. She explained: “Phages are predicted to be far less damaging to ‘resident’ and ‘helpful’ gut bacteria than conventional antibiotics but to answer this question properly, we have brought together a multidisciplinary team from the USA, Bangladesh and Sub-Saharan Africa.  Dr Nathan Brown has spent the last five years at Oregon State University determining how phages impact bacterial and viral communities in Lakes. He will be joining the University of Leicester to apply the techniques he has learned to a Shigella model.

“We will capitalise on expertise here at the University of Leicester in order to determine the efficacy of phages to Shigella, and establish how they change the gut flora.  This will be key to future developments where we hope to use phages to target bacterial infant diarrhoea in the developing world where it causes significant mortality.”

Dr Nathan Brown, a phage biologist from Oregon State University, added: “In 1919, Felix d’Herelle – one of two discoverers of bacteriophages – first showed that phage therapy was effective against Shigella in patients with dysentery. Nearly 100 years later, our team is excited to work with talented experts and use the considerable technological resources at University of Leicester to determine how phage therapy changes the complex gut ecosystem and impacts Shigella infection.”