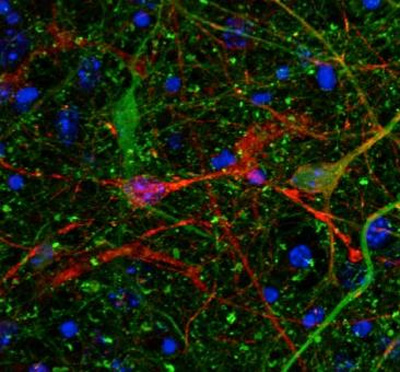 New research suggests that a toxic Alzheimer’s protein, called tau, can spread between neurons in the brain via the extracellular space that surrounds them.

The scientists, from Columbia University Medical Centre, say their discovery may explain why only one area of the brain is affected in the early stages of Alzheimer’s but multiple areas are affected in later stages of the disease.

Karen Duff, professor in the department of pathology and cell biology in the Taub Institute for Research on Alzheimer’s Disease and the Ageing Brain, says that learning how the toxic protein spreads may lead to therapies that stop it from jumping between neurons. She said: “This would prevent the disease from spreading to other regions of the brain, which is associated with more severe dementia.”

In the study, lead scientist Jessica Wu, PhD, a former post-doctoral researcher at the Taub Institute, discovered how tau travels by tracking the movement of tau from one neuron to another. The protein, she found, can be released by neurons into extracellular space, where it can be picked up by other neurons. Because tau can travel long distances within the neuron before its release, it can seed other regions of the brain.

A second interesting feature of the study is the observation that the spread of tau accelerates when the neurons are more active. Abid Hussaini, PhD, and Gustavo Rodriguez, PhD, showed that stimulating the activity of neurons accelerated the spread of tau through the brain of mice and led to more neurodegeneration.

Dr Duff explained that the results “suggest that clinical trials testing treatments that increase brain activity, such as deep brain stimulation, should be monitored carefully in people with neurodegenerative diseases.”