Radiation therapy is part of the treatment regimen for about two thirds of cancer patients today. Radiotherapy is well tolerated in most cases, but it can also lead to damage in healthy tissues that are also irradiated. One debilitating side effect is radiation-induced fibrosis. Fibrosis is a process of scarring by which healthy tissue is replaced by less elastic connective tissue, which leads to hardening and functional impairments. 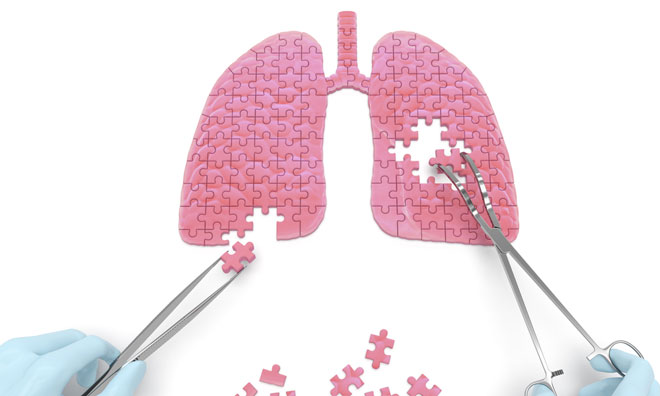 This process particularly affects the delicate tissues of the lungs when lung cancer is treated by radiation therapy. Fibrosis impairs gas exchange and thus causes shortness of breath in patients.

“We know that a whole number of growth factors and inflammation-promoting chemical messengers play a role in the development of fibrosis,” said Peter Huber of the German Cancer Research Center (Deutsches Krebsforschungszentrum, DKFZ). “But until now, agents targeting these molecules have not been effective enough to prevent pulmonary fibrosis or to improve its symptoms significantly. Much less was it possible to reverse fibrosis once it had developed. Therefore, we are urgently searching for targets that we can use to interrupt, slow down or even reverse this dreadful process.”

In experiments with mice, Huber and his colleagues have now tested an antibody that blocks the connective tissue growth factor (CTGF), which is thought to be a key messenger in the transformation of connective tissue in the lungs. The researchers treated mice with the antibody for a period of eight weeks, starting at various time points before and after radiation treatment.

All therapy regimens protected up to 80% of the animals from fibrosis. When treatment was started 16 weeks after radiotherapy, the antibody reversed the fibrotic transformation. The density of the pulmonary tissue decreased by more than 50%, and pulmonary function and oxygen supply improved. After treatment had ended, the animals still maintained a stable health status and they survived considerably longer compared to untreated fellow animals.

When treatment with the antibody was started 20 days after radiotherapy, 70% of the mice survived a radiation dose that would otherwise have been lethal.

The antibody that the Heidelberg researchers used recognizes CTGF of mice as well as its human version. Based on the data obtained in the present work, it is already being studied in clinical trials for use against other types of fibrotic disease.

“The process of fibrotic tissue transformation following radiation therapy is very similar in mice and in men,” said Sebastian Bickelhaupt, who is the study’s first author. “This suggests that our results are also relevant for humans affected by fibrosis.”

Irradiation of a tumour may cause fibrosis not only in the lungs but also in many other organs and may lead to considerable impairments in patients. This happens rather frequently in breast cancer, cancers of the head and neck and oesophageal cancer as well as in gynaecological cancers.

“The protection from fibrosis that we have been able to achieve using the antibody against CTGF in mice was impressive,” Huber said.

“We therefore think that it is promising to test the antibody also in humans who have to undergo radiotherapy. Additionally, patients with other types of fibrotic disease that are not related to radiation might also benefit from a blockade of CTGF. And maybe even the chances of curing the cancer will improve: If we reduce radiation-induced side effects, we can increase the radiation dose in the tumour.”