Scientists at The Scripps Research Institute (TSRI) have made another important advance in HIV vaccine design. 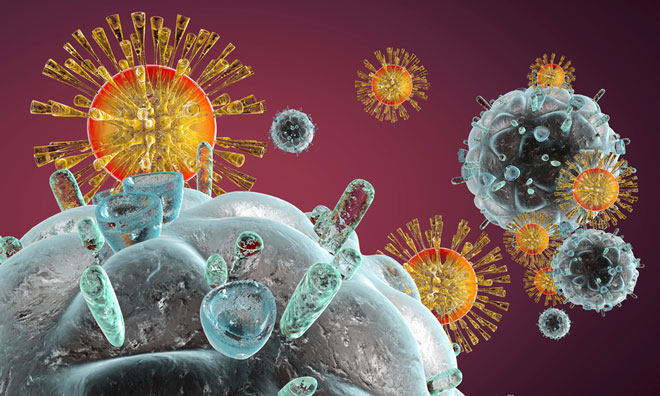 Scientists at The Scripps Research Institute (TSRI) have made another important advance in HIV vaccine design. The development was possible thanks to previous studies at TSRI showing the structures of a protein on HIV’s surface, called the envelope glycoprotein. The scientists used these structures to design a mimic of the viral protein from a different HIV subtype, subtype C, which is responsible for the majority of infections worldwide.

The new immunogen is now part of a growing library of TSRI-designed immunogens that could one day be combined in a vaccine to combat many strains of HIV.

“All of this research is going toward finding combinations of immunogens to aid in protecting people against HIV infection,” said TSRI Professor Ian Wilson, Hanson Professor of Structural Biology and chair of the Department of Integrative Structural and Computational Biology at TSRI.

The research was led by Wilson and TSRI Professor of Immunology Richard Wyatt, who also serves as Director of Viral Immunology for the International AIDS Vaccine Initiative (IAVI) Neutralizing Antibody Center at TSRI.

The new study was published alongside a second study in Immunity, led by scientists at the Karolinska Institute in Stockholm, which showed that the vaccine candidate developed in the TSRI-led study can elicit neutralising antibodies in non-human primates.

HIV mutates rapidly, so there are countless strains of HIV circulating around the world. Of these strains, scientists tend to focus on the most common threats, called clades A, B and C.

Like a flu vaccine, an effective HIV vaccine needs to protect against multiple strains, so researchers are designing a set of immunogens that can be given sequentially or as a cocktail to people so their immune systems can prepare for whatever strain they come up against.

In 2013, TSRI scientists, led by Wilson and TSRI Associate Professor Andrew Ward, determined the structure of a clade A envelope glycoprotein, which recognizes host cells and contains the machinery that HIV uses to fuse with cells. Because this is the only antibody target on the surface of HIV, an effective HIV vaccine will have to trigger the body to produce antibodies to neutralise the virus by blocking these activities.

Building on the previous original research, the scientists in the new study set out to solve the structure of the clade C glycoprotein and enable the immune system to fight clade C viruses.

“Clade C is the most common subtype of HIV in sub-Saharan Africa and India,” explained study co-first author Javier Guenaga, an IAVI collaborator working at TSRI. “Clade C HIV strains are responsible for the majority of infections worldwide.”

The scientists faced a big challenge: the clade C envelope glycoprotein is notoriously unstable, and the molecules are prone to falling apart.

Guenaga needed the molecules to stay together as a trimer so his co-author Fernando Garces could get a clear image of the clade C glycoprotein’s trimeric structure. To solve this problem, Guenaga re-engineered the glycoprotein and strengthened the interactions between the molecules. “We reinforced the structure to get the soluble molecule to assemble as it is on the viral surface,” Guenaga said.

The project took patience, but it paid off. “Despite all the engineering employed to produce a stable clade C protein, these crystals (of clade C protein) were grown in very challenging conditions at 4 degrees Celsius and it took the diffraction of multiple crystals to generate a complete dataset, as they showed high sensitivity to radiation damage,” said Garces. “Altogether, this highlights the tremendous effort made by the team in order to make available the molecular architecture of this very important immunogen.”

With these efforts, the glycoprotein could then stay together in solution the same way it remains together on the virus itself. The researchers then captured a high-resolution image of the glycoprotein using a technique called x-ray crystallography.

The researchers finally had a map of the clade C glycoprotein.

In a companion study, the scientists worked with a team at the Karolinska Institute to test an immunogen based on Guenaga’s findings. The immunogen was engineered to appear on the surface of a large molecule called a liposome—creating a sort of viral mimic, like a mugshot of the virus.

This vaccine candidate indeed prompted the immune system to produce antibodies that neutralised the corresponding clade C HIV strain when tested in non-human primates. “That was great to see,” said Guenaga.

“This study showed that the immunogens we made are not artificial molecules—these are actually relevant for protecting against HIV in the real world.”

This work was supported by the IAVI Neutralizing Antibody Center and Collaboration for AIDS Vaccine Discovery and the National Institutes of Health.