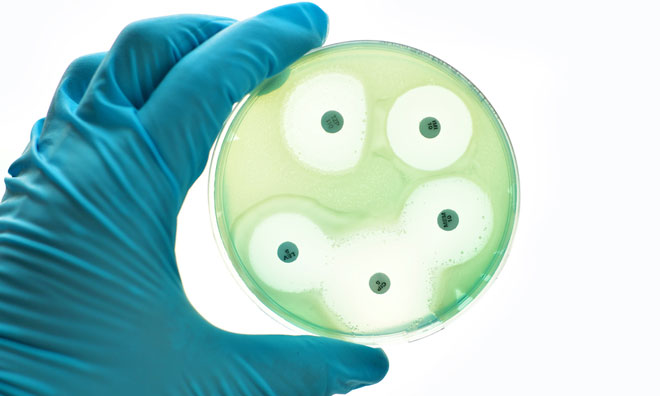 Scientists from the University of Birmingham and Norwich Research Park have discovered a link between a major mechanism of antibiotic resistance and resistance to the disinfectant triclosan which is commonly found in domestic products.

Researchers made the unexpected finding that bacteria that mutated to become resistant to quinolone antibiotics also became more resistant to triclosan.

The scientists showed that the quinolone-resistance mutation altered the way the bacteria package their DNA inside a cell and that these mutants had also turned on various self-defence mechanisms – together these gave triclosan resistance.

Quinolone antibiotics are an important and powerful group of human medicines, and this new discovery raises concerns that the use of triclosan can give antimicrobial resistance.

The research was carried out at the Institute of Microbiology and Infection at the University of Birmingham in collaboration with The Quadram Institute and John Innes Centre based at Norwich Research Park.

Corresponding author Dr Mark Webber, from the Quadram Institute and Honorary Senior Lecturer at the University of Birmingham, said: “We think that bacteria are tricked into thinking they are always under attack and are then primed to deal with other threats including triclosan.

“The worry is that this might happen in reverse and triclosan exposure might encourage growth of antibiotic resistant strains.

“We found this can happen in E. coli. As we run out of effective drugs, understanding how antibiotic resistance can happen and under what conditions is crucial to stopping selection of more resistant bacteria.”

Co-author Professor Laura Piddock, of the Institute of Microbiology and Infection at the University of Birmingham, said: “The link between quinolone and triclosan resistance is important as triclosan has become ubiquitous in the environment and even human tissues in the last 20 years”.

“Given the prevalence of triclosan and other antimicrobials in the environment, a greater understanding of the impact they can have on bacteria and how exposure to these antimicrobials may impact the selection and spread of clinically relevant antibiotic resistance is needed.”

Professor Tony Maxwell, from the John Innes Centre, said: “This work shows the power of combining the expertise from the different teams working in Norwich and Birmingham to achieve a better understanding of the mechanisms of antimicrobial resistance, which is a serious and increasing problem in the UK and elsewhere.”

In the last decade there has been an explosion in the marketing of products aimed at the home market labelled as ‘antimicrobial’.

There is also largely a lack of evidence for additional benefits of these products over traditional cleaning and hygiene products (e.g. bleach, soap and water).

There has, however, been concern raised that the active antimicrobial ingredients for some of these products are accumulating in the environment where they are altering ecosystems and potentially promoting selection of antibiotic resistant bacteria.

Triclosan, in particular, has been the cause for some concern which has led to a ban across the EU and now USA in its use in hygiene products (hand, skin and body washes). Many other antimicrobial agents are, however, still used in these products.