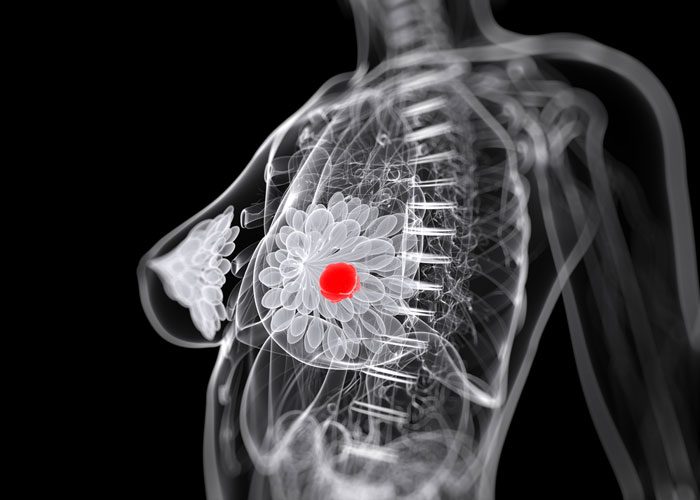 In the hunt for novel treatments against an aggressive form of breast cancer, researchers combined a new protein inhibitor with a chemotherapy drug to create a powerful combination that resulted in cancer cell death.

The drugs studied were each tested separately in triple-negative breast cancer cell lines and in mice with the disease. The researchers at The University of Michigan then implemented the treatments in combination. The combination produced a synergistic effect that was more effective than either drug alone.

The cancer cells treated with the drug combination were less likely to multiply or spread in cell culture and were less viable in an animal model.

Preliminary data had shown that inhibiting proteins called cyclin-dependent kinases, or CDKs, might be effective against triple negative breast cancer. In this study, researchers tested a pharmaceutical grade CDK inhibitor called CYC065. Additionally, researchers used the chemotherapy drug eribulin, which had shown promise in prior clinical trials for the treatment of triple-negative breast cancer.

“In this pre-clinical study, we showed that the combination of CYC065 and eribulin had a synergistic effect against the growth and progression of triple-negative breast cancer. New therapeutic targets and treatment strategies are crucial to improve outcomes for women with this aggressive breast cancer subtype,” says study author Dr Jacqueline S. Jeruss, Director of the Breast Care Center at the University of Michigan Comprehensive Cancer Center.

Dr Jeruss was interested in how signalling pathway alterations could impact the development of breast cancer. What makes a mammary cell change to allow for lactation but then regress when that function is no longer needed? What orchestrates cell regulation to allow for such carefully mediated physiologic changes? And what processes occur over time that causes the cellular deregulation leading to cancer development in certain patients, but not in others?

Dr Jeruss work led her to the implementation of CDK inhibitors for the treatment of triple negative breast cancer. She found that these drugs could help to block the harmful impact of overexpression of cancer-promoting cyclin E/CDKs, proteins that were inhibiting the tumour suppressant action of the TGF-beta/SMAD3 pathway.

CDK inhibitors can block the impact of cyclin E/CDK action, helping to restore the beneficial effects of the TGF-beta/SMAD3 pathway, and thus facilitate cancer cell death.

“We have begun to identify a network of vulnerable and targetable signalling components within the triple negative cancer cells that can be exploited with CDK inhibitor and chemotherapy treatment to promote triple negative breast cancer cell death,” said Dr Jeruss.

Triple-negative breast cancer is a subtype that does not express hormone receptor or HER2. It occurs in approximately 15 percent of patients with breast cancer. This subtype tends to be more aggressive and targeted therapeutic treatment options are lacking.