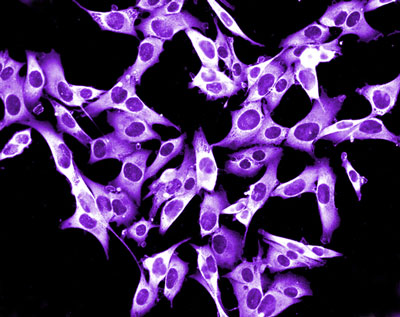 The significance of this finding lies in the fact that melanoma is associated with a variety of mutations with those to the BRAF gene being the most prominent. A mutation to the BRAF gene occurs in about half of all melanoma patients and two drugs that target that mutation (vemurafenib and dabrafenib) have come to market in recent times.

No targeted therapy exists for the 50% of melanoma patients whose tumours do not have the BRAF mutation. But even where a response is obtained with a BRAF-inhibitor resistance typically develops within a year of treatment. Therefore the development of a drug that kills melanoma cells irrespective of their BRAF or any other mutational status has become an urgent clinical imperative. Novogen believes that Anisina represents a significant potential opportunity to meet this need.

UQDI screened Anisina against a panel of melanoma cells obtained from patients and which represented the spectrum of mutations (BRAF, NRAS and c-KIT) commonly found in the community. Anisina was uniformly cytotoxic to the panel of cells regardless of their mutational status. Importantly Anisina showed a high level of specificity to cancer cells with toxicity against normal melanocytes requiring a four-fold drug level.

Anisina is being brought in to the clinic in early-2016

Anisina is an anti-tropomyosin compound that targets the cytoskeleton of the cancer cells. It is being brought into the clinic for the treatment of cancers as a companion drug for the anti-mitotic family of drugs:  taxanes and vinca alkaloids. The rationale is that the use of Anisina (targeting the microfilaments) in combination with anti-mitotic drugs (targeting the microtubules) provide comprehensive destruction of the two key parts of the cancer cell’s skeleton resulting in a 20-fold increase in the anti-cancer effect of either drug family alone.

Anisina is being brought into the clinic in early-2016 for the treatment of solid cancers with late-stage melanoma and prostate cancer in adults and neuroblastoma in children being three key target indications. The current results give strength to the aim of conducting a clinical study in patients with late-stage melanoma using a combined treatment of Anisina and vincristine.

Dr Nikolas Haass MD PhD conducted the study with and Brian Gabrielli PhD. Dr Haass said, “These findings from the preliminary screen with Anisina are exciting. Finding a compound that is equally effective against a wide panel of melanoma cell types irrespective of the genetic background has been a long-held goal. The University of Queensland Diamantina Institute is pleased to be part of the effort to bring this new drug candidate into the clinic.”

“But we see a 20-fold increase in the cancer killing effect of these drugs when combined with Anisina. We have demonstrated this combination effect with vincristine in prostate cancer cells neuroblastoma cells and now melanoma cells. The idea that we now have a means of making melanoma cells respond to potent anti-cancer drugs such as vincristine is an exciting development for patients with melanoma.”

Graham Kelly PhD Novogen Group CEO said, “These results support our belief that Anisina has the potential to become one of the most widely used anti-cancer drugs across the full spectrum of cancer. In conjunction with our clinical advisors we have a clinical strategy laid out which we intend to prosecute all the way through to achieving regulatory approval.”