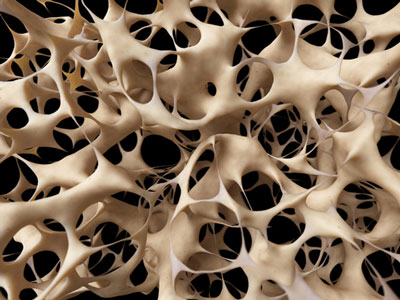 Scientists from the The Scripps Research Institute (TSRI) have identified a new therapeutic approach that could promote the development of new bone-forming cells in patients suffering from bone loss.

The study focused on a protein called PPARy (known as the master regulator of fat) and its impact on the fate of stem cells derived from bone marrow (“mesenchymal stem cells”). Since these mesenchymal stem cells can develop into several different cell types—including fat, connective tissues, bone and cartilage—they have a number of potentially important therapeutic applications.

The scientists knew that a partial loss of PPARy in a genetically modified mouse model led to increased bone formation. To see if they could mimic that effect using a drug candidate, the researchers combined a variety of structural biology approaches to rationally design a new compound that could repress the biological activity of PPARy.

The results showed that when human mesenchymal stem cells were treated with the new compound, which they called SR2595 (SR=Scripps Research), there was a statistically significant increase in osteoblast formation, a cell type known to form bone.

“These findings demonstrate for the first time a new therapeutic application for drugs targeting PPARy, which has been the focus of efforts to develop insulin sensitizers to treat type 2 diabetes,” said Patrick Griffin, chair of the Department of Molecular Therapeutics and director of the Translational Research Institute at Scripps Florida. “We have already demonstrated SR2595 has suitable properties for testing in mice; the next step is to perform an in-depth analysis of the drug’s efficacy in animal models of bone loss, aging, obesity and diabetes.”

In addition to identifying a potential new therapeutic for bone loss, the study may have even broader implications.

“Because PPARG is so closely related to several proteins with known roles in disease, we can potentially apply these structural insights to design new compounds for a variety of therapeutic applications,” said David P. Marciano, first author of the study, a recent graduate of TSRI’s PhD program and former member of the Griffin lab. “In addition, we now better understand how natural molecules in our bodies regulate metabolic and bone homeostasis, and how unwanted changes can underlie the pathogenesis of a disease.” Marciano will focus on this subject in his postdoctoral work in the Department of Genetics at Stanford University.

The study is published in the journal Nature Communications.