By identifying ERManI as the target that slows the spread of HIV-1, researchers have revealed a target in which future therapies can be developed… 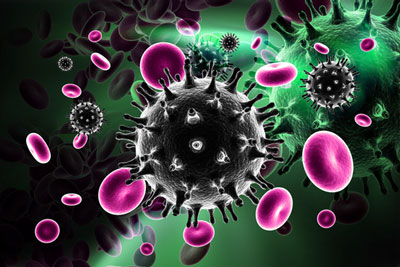 An international team of researchers have discovered a new natural defence against HIV infection.

The team’s discovery focuses on ERManI, a protein that prevents the HIV virus from replicating.

“In earlier studies, we knew that we could interfere with the spread of HIV-1, but we couldn’t identify the mechanism that was stopping the process,” said Yong-Hui Zheng, Michigan State University (MSU) associate professor of microbiology and molecular genetics. “We now know that ERManI is an essential key, and that it has the potential as a antiretroviral treatment.”

Antiretroviral treatments are not vaccines; they simply keep HIV in check in low levels in the body. While it could be decades before an ERManI-based treatment can be prescribed for HIV-1 patients, these results provide a strong path for future research involving human cells, and later, clinical tests.

The next steps will be to test if HIV resistance can be promoted by increasing ERManI levels, said Zheng, who worked on the study with scientists from the Harbin Veterinary Research Institute, the Chinese Academy of Agricultural Sciences and the University of Georgia.

Most viruses have viral envelopes that comprise similar building blocks of the host the pathogens are trying to infect. On the surface of the envelope, there are viral glycoproteins, known as Env spikes, which lead viruses to binding sites that allow infections to spread at the molecular level. They serve as a key that gives viruses entry into the host to begin spreading.

Future therapies may be developed to target ERManI

Zheng’s lab was the first to show that HIV-1 envelope glycoprotein biosynthesis can be specifically inhibited by ERManI, which is a host enzyme to add sugars to proteins. By identifying ERManI as the target that slows the spread of HIV-1, the team has revealed a target in which future therapies can be developed. Researchers at Michigan State University were part of a team to discover a new natural defense against HIV infection. CREDIT: G.L. Kohuth

Currently, there is no cure for HIV-1. While there are antiretroviral therapies available, they can only prolong life. Current drug treatments have to be taken for a lifetime, which causes side effects and many other issues, Zheng said.

“We see a way to treat this disease by helping the body protect itself,” he said. “That’s why we continue to move our research forward, seemingly slowly at times, because finding a cure will take years. We feel that’s it’s important enough, on a world-wide scale, to dedicate our work to fighting this disease.”