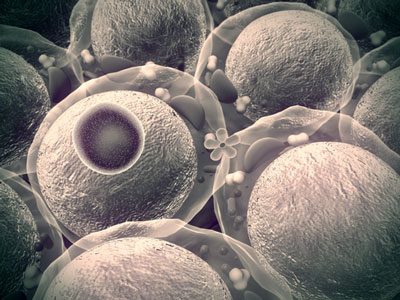 Up to 80% of people with long-standing type 1 diabetes develop gastrointestinal symptoms that severely diminish quality of life.

Now, research conducted at Boston Children’s Hospital reveals the cause of this complication, known as diabetic enteropathy, and a possible prevention and treatment strategy.

The study, led by Paolo Fiorina, MD, PhD, demonstrates how diabetes can destroy the stem cells that maintain the intestinal lining – through excess production of a hormone called insulin-like growth factor binding protein 3 (IGFBP3). In animal models, a protein that “soaks up” this hormone was able to restore normal intestinal stem cell function.

Fiorina and colleagues began by studying 60 patients with long-standing type 1 diabetes. Through proteomics analysis of the patients’ blood, they discovered strikingly elevated levels of IGFBP3 – almost five times that in 20 healthy controls. Levels of the hormone corresponded with GI symptoms and colonic stem cell abnormalities, and rose dramatically in correspondence with blood sugar levels.

“Everyone has IGFBP3, but in people with hyperglycaemia, the liver makes more of it,” explains Fiorina, a physician and scientist in the Division of Nephrology at Boston Children’s. “We think that the liver senses the high blood glucose level and makes more of this hormone try to reduce glucose absorption in the intestine.”

IGFBP3 may be necessary to health, as it checks excess intestinal stem-cell proliferation, says Fiorina. Unfortunately, in type 1 diabetes, this protective mechanism is on overdrive.

Turning to a mouse model of diabetes, Fiorina and colleagues showed that IGFBP3 binds to a receptor in the intestines called TMEM219 and disrupts intestinal stem cell function. When they cloned a portion of the TMEM219 protein and gave it to the mice, it bound up the circulating IGFBP3, causing levels to drop and healthy stem cell function to resume. In diabetes patients who had kidney-pancreas transplantation, which restores normal blood glucose, IGFBP3 levels and stem cell function normalised and GI symptoms diminished.

Fiorina and colleagues are now doing further tests on the TMEM219-derived drug to see if it could prevent or treat diabetic enteropathy. They are also testing ways to stop liver cells from producing so much IGFBP3 to begin with.

Scientifically, the findings represent one of the first known instances of a hormone controlling stem cell production. They suggest that stem cells’ regenerative qualities can be exploited without having to actually manipulate and deliver cells or figure out how to prevent foreign cells from being destroyed by the immune system.

“If you have hormones like [IGFBP3] that actually affect the stem cell niche, you can bypass cell therapy and allow the niche to do its job in a better way,” says Fiorina. “This approach could reshape the way we imagine cell therapy. I think that many other hormones with similar functions will be discovered.”