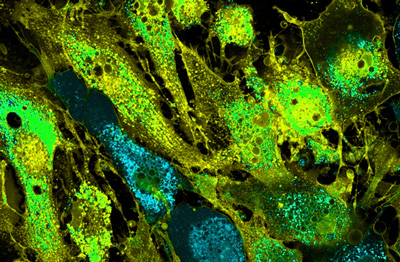 A new study from The Ottawa Hospital and the University of Ottawa is the first to show that Duchenne muscular dystrophy directly affects muscle stem cells.

“For nearly 20 years, we’ve thought that the muscle weakness observed in patients with Duchenne muscular dystrophy is primarily due to problems in their muscle fibres, but our research shows that it is also due to intrinsic defects in the function of their muscle stem cells,” said Dr Michael Rudnicki, Director of the Regenerative Medicine Program at The Ottawa Hospital and a professor at the University of Ottawa. “This completely changes our understanding of Duchenne muscular dystrophy and could eventually lead to far more effective treatments.”

Duchenne muscular dystrophy is the most common form of muscular dystrophy, affecting approximately one in 3,600 boys. It is caused by genetic mutations that result in the loss of the dystrophin protein, leading to progressive muscle weakness and death by the second or third decade of life.

Muscle stem cells are responsible for muscle repair after normal injuries and exercise. In response to muscle damage, these stem cells divide to generate precursor cells that become the fibres that make up our muscles.

For many years, dystrophin was thought to be a simple structural protein only found in muscle fibres. In the current study, Dr Rudnicki and his team discovered that muscle stem cells also express the dystrophin protein, and without this protein, they produce ten-fold fewer muscle precursor cells, which in-turn generate fewer functional muscle fibres. They also discovered that dystrophin is a key member of the molecular machinery that enables muscle stem cells sense their orientation in the surrounding tissue.

This research was conducted in mouse cells, but it is expected that the findings will hold in humans, as the dystrophin protein is almost identical in all animals.

Current treatments for Duchenne muscular dystrophy are limited to steroids and physical therapy that slow disease progression and lessen symptoms. Experimental approaches such as gene therapy are also being investigated, but Dr Rudnicki’s research suggests that these approaches will have to be modified so that they target muscle stem cells as well as muscle fibres.

“We’re already looking at approaches to correct this problem in muscle stem cells,” said Dr Rudnicki. “I’m not sure if we will ever cure Duchenne muscular dystrophy, but I’m very hopeful that someday in the future, we will have new therapies that correct the ability of muscle stem cells to repair the muscles of afflicted patients and turn this devastating, lethal disease into a chronic but manageable condition.”