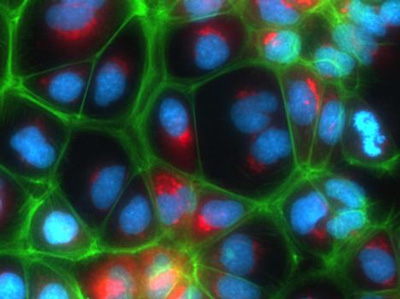 An international research team led by The Hebrew University of Jerusalem have described a new technique for growing human hepatocytes in the laboratory.

This groundbreaking development could help advance a variety of liver-related research and applications, from studying drug toxicity to creating bio-artificial liver support for patients awaiting transplantations.

Human hepatocytes – cells that comprise 85% of the liver – are routinely used by the pharmaceutical industry for study of hepatotoxicity, drug clearance and drug-drug interactions. They also have clinical applications in cell therapy to correct genetic defects, reverse cirrhosis, or support patients with a liver-assist device.

However, while the human liver can rapidly regenerate in vivo, this capability to proliferate is rapidly lost when human cells are removed from the body. Thus far, attempts to expand human hepatocytes in the laboratory resulted in immortalised cancer cells with little metabolic function. The scarce supply of human hepatocytes and this inability to expand them without losing function is a major bottleneck for scientific, clinical and pharmaceutical development.

To address this problem, Prof. Yaakov Nahmias, director of the Alexander Grass Centre for Bioengineering at the Hebrew University of Jerusalem, partnered with scientists at upcyte technologies to develop a new approach to rapidly expand the number of human liver cells in the laboratory without losing their unique metabolic function.

The research team demonstrated that weak expression of HPV E6 and E7 proteins released hepatocytes from cell-cycle arrest and allowed them to proliferate in response to Oncostatin M (OSM). Whereas previous studies caused hepatocytes to proliferate without control, turning hepatocytes into tumour cells with little metabolic function, the researchers carefully selected colonies of human hepatocytes that only proliferate in response to OSM. Stimulation with OSM caused cell proliferation, with doubling time of 33 to 49 hours. Removal of OSM caused growth arrest and hepatic differentiation within 4 days, generating highly functional cells. The method, described as the upcyte process, allows expanding human hepatocytes for 35 population doubling, resulting in 1015 cells (quadrillion) from each liver isolation. By comparison, only 109 cells (billion) can be isolated from a healthy organ.

“This is the holy grail of liver research,” said Prof. Nahmias. “Our technology will enable thousands of laboratories to study fatty liver disease, viral hepatitis, drug toxicity and liver cancer at a fraction of the current cost.” Nahmias noted that genetic modifications preclude using the cells for transplantation, “but we may have found the perfect cell source for the bio-artificial liver project.”