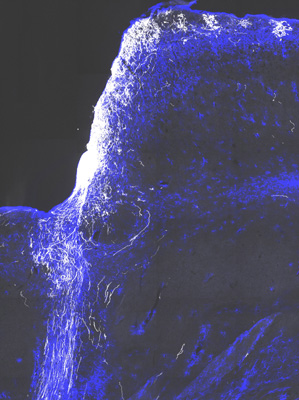 Research suggests the possibility of restoring at least some visual function in people blinded by optic nerve damage from glaucoma or from trauma.

The scientists, from Boston Children’s Hospital, were able to restore vision in mice with optic nerve injury by using gene therapy to get the nerves to regenerate and adding a channel-blocking drug to help the nerves conduct impulses from the eye to the brain. In the future, they believe, the same effect could be achieved with drugs alone.

In the study, previously blind mice turned their heads to follow patterns of moving bars after given the treatment, say co-senior investigators Zhigang He, PhD, and Michela Fagiolini, PhD. The technicians doing the tests did not know which mice had been treated.

“By making the bars thinner and thinner, we found that the animals could not only see, but they improved significantly in how well they could see,” says Fagiolini.

Approach could realistically be used in the clinic to restore vision

While other teams have restored partial vision in mice, they relied on genetic techniques that can only be done in a lab. Generally, their methods involved deleting or blocking tumour suppressor genes, which encourages regeneration but could also promote cancer. The new study is the first to restore vision with an approach that could realistically be used in the clinic, and that does not interfere with tumour suppressor genes.

The key advance in restoring vision was getting the regenerated nerve fibres (axons) to not only form working connections with brain cells, but also to carry impulses (action potentials) all the way from the eye to the brain. The challenge was that the fibres regrow without the insulating sheath known as myelin, which helps propagate nerve signals over long distances.

“We found that the regenerated axons are not myelinated and have very poor conduction – the travel speed is not high enough to support vision,” says He. “We needed some way to overcome this issue.”

Turning to the medical literature, they learned that potassium channel blocker, 4-aminopyridine (4-AP) (a drug marketed as Ampyra), helps strengthen nerve signals when myelin is absent. When they added it, the signals were able to go the distance.

While the study used a gene therapy virus called AAV to deliver the growth factors that trigger regeneration (osteopontin, insulin-like growth factor 1 and ciliary neurotrophic factor), He and Fagiolini are testing whether injecting a “cocktail” of growth factor proteins directly into the eye could be equally effective.

“We’re trying to better understand the mechanisms and how often the proteins would have to be injected,” says He. “The gene therapy virus we used is approved for clinical study in eye disease, but a medication would be even better.”

With regeneration kick-started, 4-AP or a similar drug could then be given systemically to maintain nerve conduction. Because 4-AP has potential side effects including seizures if given chronically, He and Fagiolini have begun testing derivatives (not yet FDA-approved) that are potentially safer for long-term use.