Cancer cells are addicted to glucose and glutamine, which enables them to generate the energy and macromolecule synthesis intermediates to support their growth… 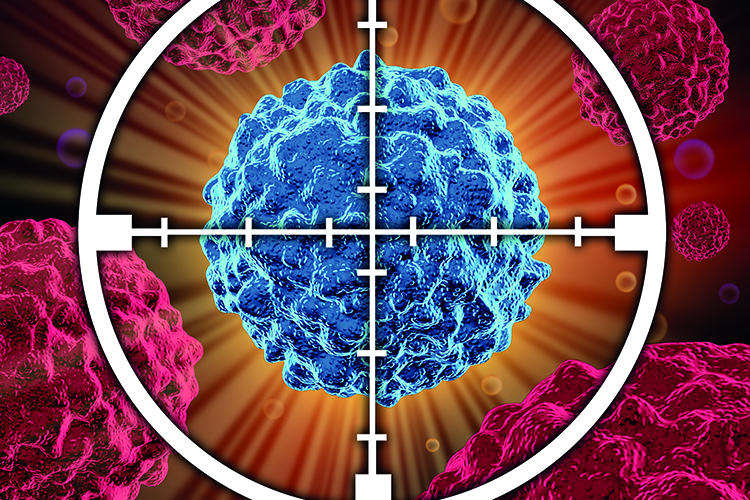 This shift in their metabolic profile may expose targets for therapeutic intervention that can selectively attack these cells, stopping them in their tracks without interfering with normal cells that are not addicted. A selection of potential targets and screening strategies to find compounds targeting cancer metabolism is outlined in this article.

In normal (differentiated) tissues and cells, glucose is metabolised through oxidative phosphorylation (normal oxygen concentrations) or anaerobic glycolysis (low oxygen concentrations). Experiments carried out in the 1920s by Otto Warburg established that the metabolism of proliferating cancer cells is considerably different. In particular, most cancer cells appear to switch to aerobic glycolysis, a process known as the Warburg effect. This metabolic shift also increases the rates of glucose uptake into the tumours and this can be visualised in FDG-PET images. Importantly, with the high glucose uptake, aerobic glycolysis still provides sufficient energy for the cells and, in addition, allows for the diversion of most of the glucose-derived lactate towards providing the carbon in building blocks and materials for multiplication.

Since rapidly proliferating tumour cells require the increased synthesis of additional macromolecules like lipids, proteins, and nucleotides, a source of nitrogen is also required. Glutamine, normally not an essential amino acid, becomes the major nitrogen source in the tumour cells, thereby becoming conditionally essential. The overall consequence of this metabolic shift in the cancer cells is an addiction to glucose and glutamine that selectively exposes the cancer cells to some potential new targets for pharmacological intervention1-6. The potential therapeutic targets that can be directly linked to this addiction fall into three broad categories: glutamine and glucose transporters, glucose processing (mainly glycolytic) enzymes, and glutamine processing enzymes. Examples of selected targets are discussed below along with a brief outline of a screening strategy.

To find inhibitors of these transporters, one could employ assays that indirectly measure the activity of the transporters (glucose uptake for example) or the cell surface expression of the various receptors. Once the glucose and glutamine are inside the cells, they are processed to feed into metabolic pathways that produce energy and metabolic intermediates.

There are a number of enzymes involved in glycolysis and I will only discuss two of them in the context of potential drug targets in tumour metabolism.

Hexokinase catalyses the first step in glycolysis: the phosphorylation of glucose to form glucose-6-phosphate, which also turns out to be a rate-limiting step in this pathway. In addition, Hexokinase appears to be required for the switch to aerobic glycolysis, therefore, targeting this enzyme could be a viable treatment strategy in certain cancers13.

A couple of small molecule inhibitors of hexokinase have been described. 2-deoxyglucose (2DG), is a non-metabolizable analogue of glucose, that has shown some preclinical efficacy in a mouse Xenograft model, when combined with standard chemotherapy14. 3-bromopyruvate (3BP) similarly targets hexokinase in vitro15. Both of these hexokinase inhibitors appear to effectively deplete the cellular adenosine triphosphate (ATP) pools by stopping or slowing down glycolysis (without any overt toxicities); however, the effective concentrations required for this activity are rather high and preclude their use as single agent therapies and they are thus proposed to be useful in combination treatment with standard chemotherapies. The efficacy observed in the Xenograft model also shows that hexokinase inhibition may have a synergistic effect with some chemotherapeutic agents, thus potentially achieving efficacy at lower doses and perhaps avoiding some of the toxicities normally associated with the chemotherapy.

Pyruvate kinase catalyses the last step in the glycolytic pathway, the dephosphorylation of phosphoenolpyruvate to yield pyruvate and ATP. The normal activity of pyruvate kinase is a key step in glycolysis, with most of the pyruvate produced then entering the tricarboxylic acid (TCA) cycle. In the case of cancer cells, however, pyruvate is mostly converted into lactate and diverted for use as an intermediate in various biosynthetic pathways. There are four isoforms of pyruvate kinase, of which pyruvate kinase M2 (PKM2) is selectively expressed in proliferating cells and tissues. It is also overexpressed in some cancer cells. Both the expression and activity of PKM2 are tightly regulated and inhibition or siRNA knockdown of PKM2 induce apoptosis in vitro. There are obvious caveats to this being used as a therapeutic approach, however, since PKM2 is also expressed in normal, proliferating tissues16,17.

As a general screening strategy for finding inhibitors of hexokinase and PKM2, it would be feasible to screen for compounds that can both deplete ATP as well as induce differentiation or apoptosis. With both of these potential targets, the inhibition may not need to be complete for such an inhibitor to be useful for combination with standard chemotherapy at concentrations where the compounds are not toxic.

Glutaminolysis is the process of glutamine metabolism and utilisation. The critical first step in this pathway, carried out by the mitochondrial enzyme glutaminase, is the hydrolysis of glutamine to produce glutamate and ammonium. Glutamate can then be further processed to yield the TCA cycle intermediate α-ketoglutarate. Although early attempts at developing small molecule inhibitors of glutaminase (mainly glutamine mimetics) looked good in preclinical settings, they were discontinued due to clinical toxicities18-20.

More recent efforts have identified small molecules that show more promise in selectively abrogating Rho-induced oncogenic fibroblast transformation as well as inhibiting the growth of cancer cells in vitro21. To find novel inhibitors of glutaminase, one could employ a biochemical in vitro enzyme assay22 and simply screen compound libraries with this. Alternatively, a screening strategy can be developed that would cast a wider net for inhibitors of tumour metabolism by screening for compounds that deplete ATP levels in cells. The most direct cell-based assays that measure ATP levels in cells are simple, high throughput luminescence-based assays. An alternative approach would be to screen for compounds that induce apoptosis (Caspase 3 activation for example) or differentiation in a cell-based high throughput primary screen. In all of these, the primary screen would be followed by a selectivity panel of assays to tease out the mechanism of activity of the compounds found in the primary screen (such as a biochemical, in vitro PKM2, hexokinase or glutaminase assay, for example).

The early work on inhibitors of cancer metabolism showed promise in preclinical settings, but, unfortunately, the compounds were unsuitable for clinical use, mainly because of their toxicity. Enthusiasm for targeting cancer metabolism was thus dampened. However, some recent work with drugs such as Metformin has highlighted the importance of cancer metabolism and made this an exciting research area once again, with increasing effort spent on developing novel therapies that work by inhibiting or attenuating cancer metabolism. It is clear that cancer cells that are addicted to glucose and glutamine may be vulnerable to such compounds, however, to avoid the clinical dead-ends of the past, we will need to pay close attention to the in vitro selectivity of anti-metabolic compounds against normal cells that have high proliferative capability, such as immune system cells (that also appear to have a similar metabolic profile). As the metabolic pathways are highly interdependent, it may also not be necessary to achieve total inhibition of any one particular key metabolic target (transporter or enzyme); a simple attenuation to the levels of activity found in normal cells may be sufficient. This also opens up the possibility of using anti-metabolic compounds in combination with clinically proven pathway selective inhibitors at concentrations where neither is toxic. This approach appears to be promising in the case of the hexokinase inhibitors mentioned above.

With cancer metabolism recently becoming an area of intense research activity, it is hoped that this will translate to some new therapeutics for some of the more aggressive and currently untreatable human cancers.