Data drives drug discovery, yet it continues to be among the biggest challenges faced by the industry.1 Experiments are often not repeatable and data interpretation is subject to the biases and limitations of human beings.

There are many reasons that molecules fail to become marketed drugs. In order to help avoid this, it is imperative that decisions are made from the most accurate representation of the science; otherwise the risks of failure only increase. Evolving technology presents many opportunities to not only reverse the tides, but to leverage data with unprecedented benefits.

The information age has seen an explosion of data over the last few decades,2 but more data does not inherently yield better understanding.3 It has been shown that the human brain is limited in its capacity to process data4 and that biases further complicate the reliability of the conclusions drawn.5 In addition, the human brain often does not recall all data after a certain time has elapsed, thus retrospective analyses over time becomes challenging, impossible or completely inaccurate.

While these difficulties are not easily solved, technology may hold some answers. Artificial intelligence (AI) is software technology that enables machines to think and learn. Machines, unlike humans, can perform complex calculations on large data sets quickly; can perform tasks consistently; and are not influenced by emotions. However, machines have generally relied on direct explicit instructions to perform tasks. For example: typing a single letter into primitive word processing software will display it on the computer screen; this is direct input and response reflecting only the single input that is provided. Artificial intelligence opens the door to leveraging the strengths of machines to perform complex analysis where humans fall short. Typing the same letter in a search engine produces a list of suggested search terms tailored to the user. These suggestions are generated by data intelligence technology that interprets the letter with a combination of many secondary data points, called metadata, such as the individual’s previous browsing history and current events. If a group of people were each asked to make a list of search suggestions from a single letter and a small set of metadata, they may produce similar lists. As the data volume grows, human data capacity becomes saturated and predictions would likely become increasingly divergent. Without data intelligence, the letter is just the letter on a screen, and large data sets may contribute more noise than knowledge. However, intelligent software brings consistency and completeness to the analysis, and far more relevance when metadata are included.

In drug discovery, data intelligence technology has numerous applications; one of which is data interpretation, where context provides a crucial backdrop to the experimental data, offering insight that the experimental data alone may not capture. For instance, the fluorescence signal of a biological assay may be associated with a known interaction of interest. However, perhaps the signal is sensitive to temperature or a test substance is fluorescent. A further possibility that might add to the complexity is that neither dependency is known. An interpretation of only the experimental data would be completely misleading and potentially disastrous if the context of temperature and substance properties are not accounted for. An inactive compound could be promoted, wasting valuable resources on a dead end; or even worse, a would-be lead compound may be discarded and forgotten. Every experiment has hundreds, if not thousands, of these data points that complement each experimental data point.  These data points extend beyond a single experiment to a full heredity of movements, conditions, and processes about each component in the sample. Most of these data points are not currently used or even collected, instead relying on controls to adjust for variability and unknowns. Data intelligence creates an opportunity to use these data points and explore what may be hiding behind experimental data. Perhaps assay variability can be explained or new insight about a target can be elucidated. As much as a search engine does with a single letter, intelligence technologies can provide far better meaning to experimental data by including metadata for a fully contextual analysis.

While artificial intelligence can provide new insights from data after an experiment, it can also assist with conducting science in the lab. Lead optimisation is a late-stage drug discovery process that refines molecules for safety and efficacy against a disease – it works on a cycle of designing molecules based on biological data, synthesising them, and then testing their biological activity. Many biological assays can test thousands of compounds in a single day. However, each molecule designed by medicinal chemists must be synthesised and purified, which can take days or weeks to complete. The chemistry may be unknown, multistep and time consuming. Automated synthesis and artificial intelligence technologies are being developed to help solve some of these challenges. Retrosynthesis is the process of solving each step of synthesising a compound, starting from the product and working back to commercial or readily-available reagents. There are millions of known single step chemical reactions,6 so it’s impossible for a chemist to know them all. Instead, it is routine practice for chemists to parse the literature in search of reported chemistry that could solve the problem – work that is time consuming and well suited for intelligent software. Retrosynthesis software applies artificial intelligence to reference known chemical reactions and solve reaction schemes, much like chemists do. The difference is that software can access all known chemical reactions and perform complex analysis that predicts the route, and a chemist is limited by their knowledge and how many references they can find and read. Development of such software has been ongoing for many years, and significant recent advancements have been reported.6 As retrosynthetic software improves, solving synthetic problems may take just a few clicks.

The role of automation

While software may shorten the time to solve the question of how to make a molecule, the reaction must still be carried out in the lab. A chemist is usually assigned multiple compounds at a time and must be able to make them efficiently. Difficult chemistry often requires trying many test reactions of multiple conditions and reagents to find one that works. Conventional synthesis is slow and labour intensive, requiring each reaction to be set up and run individually. Several automated approaches to synthesis that can remove these bottlenecks have been reported and are continuously being developed.7,8 Automation need only be set up once to run multiple reactions without any further effort from the chemist. It can run continuously to generate compounds of interest and methodically iterate through many conditions to solve challenging transformations. Automated synthesis approaches can free the chemist from repetitive time-consuming tasks and reduce the time to access and test new chemical matter.

When taken individually, applications for artificial intelligence in drug discovery have immense potential, but machine intelligence will enable researchers to go one step further. Robots in drug discovery have been widely applied to biological assays that test molecules.9 Advancements in automated synthesis, retrosynthesis, and data intelligence create a perfect storm to combine biology and chemistry into a fully automated closed-loop process and efforts are underway to achieve it.10 Synthetic methods are determined by retrosynthesis software and sent to automated synthesis devices where molecules are synthesised, purified, and transferred to the assay. Once compounds are transferred, robotics are automatically triggered to execute the assay and to collect data on each sample. Intelligent software interprets the experimental and metadata in the context of not just the experiment, but of all the data in the organisation. The software then designs the next round of molecules and the cycle repeats with the software learning after each round. It may sound like science fiction, but many of these capabilities are developing rapidly or already exist – though certainly significant development in artificial intelligence and automation remains in order to create a truly automated drug discovery system as described. While such a system in its entirety may still lay in the fringes, it provides a template for organisations to solve problems today with available technology and prepare for a future that will look very different.

Intelligent automated systems could help address many of the challenges faced in drug discovery. Lead optimisation cycle times could be reduced from weeks to days or even hours. Human limitations and biases could be removed from data analysis. Robotics could practically eliminate experimental inconsistencies. Metadata could provide insight into the cause of any remaining inconsistencies and offer a more complete context to experimental data. In other words, better decisions could be made faster, leading to better treatments getting to patients faster. Select considerations and solutions have been discussed, though many details and options exist. The frontiers at the interface of technology and science are exciting and promising. If well executed, organisations have an opportunity to prosper in the age of information intelligence, and most importantly, advance patient treatment with extraordinary speed and benefit.

Jeff Martin leads the compound management function and is responsible for developing and deploying technologies throughout the research organisation at Alkermes. He has over a decade of experience applying robotics to science, and a passion for solving hard scientific problems with technology and creativity. Jeff joined Vertex in 2015 where he was responsible for compound management and automation in Boston. Prior to joining Vertex, he worked in a number of roles at Biosero, ultimately leading custom robotics projects. Jeff earned a Bachelor of Arts from Assumption College and Master of Science from the University of Massachusetts Amherst, both in chemistry. 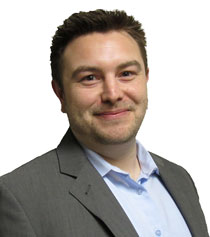