The advent of CRISPR/Cas9 gene editing, together with the plummeting cost of whole-genome sequencing, has cleared a path for the development of customised cancer cell models. Here, we discuss recent developments in the field and challenges associated with targeted-therapy resistance. 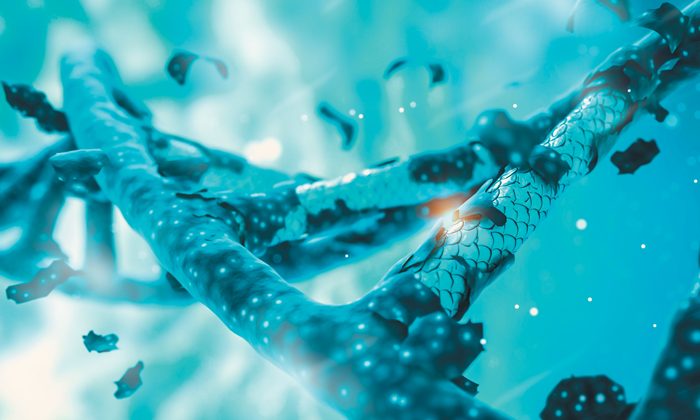 The shift towards targeted therapies in cancer treatment, which began with the development of tamoxifen and accelerated following the success of such drugs as rituximab and imatinib (Gleevec), has altered our perceptions of cancer treatment and cancer prognosis. By targeting the molecular pathways that drive tumour proliferation, rather than killing all rapidly dividing cells as in traditional chemotherapy, targeted therapies have the potential to turn a dire prognosis into a manageable condition.1

However, despite encouraging progress in this area, there remain significant challenges regarding relevant cancer biomarker identification and testing, low clinical trial success rates for new therapies and rapid development of resistance to certain targeted therapies.2 Discovery and development of new therapies for current and emerging cancer targets relies heavily on high-throughput screening and iterative refinement of lead compounds and biologics.3 Simple cell systems and historical cancer lines are frequently used for these screenings because they are easy to work with, relatively inexpensive and scale easily.4 However, the success rates of lead compounds and biologics in subsequent animal studies and clinical trials could be increased by using more biologically-relevant and mechanism-specific tumour model systems.

Currently available cancer model systems for targeted drug screening are typically derived from either commonly used tumour cell lines or from established cell lines that have been modified to overexpress specific targets. Both model types have their respective pros and cons. Primary or spontaneously immortalised tumour cells more closely model the genetic and phenotypic heterogeneity found in clinical tumour samples, but this heterogeneity is rarely fully characterised or defined, so results can be difficult to interpret. Even when well-characterised cancer lines are used as screening models, the screening of therapies that target a specific oncogenic mechanism is confounded by the complex web of mechanisms that promote tumour growth. Established cancer cell lines rarely come with appropriate control lines that would help to tease apart these complex interactions. By contrast, models derived from cell lines modified to overexpress a particular cancer biomarker have a clear oncogenic mechanism. However, expression of an oncogene at artificially high, non-physiological levels in a cell that would otherwise be non-cancerous doesn’t adequately model the complex cascade of events that results in the formation of a tumour in vivo.

Accelerating the progression of therapeutics

The advent of CRISPR/Cas9 gene editing, together with the plummeting cost of whole-genome sequencing, has cleared a path for the development of customised cancer cell models. These engineered models have the potential to dramatically accelerate the development of targeted cancer therapeutics. CRISPR/Cas9 has enabled us to reliably and cost-effectively edit the genome of any target organism or cell line,5-7 while whole-genome sequencing has enabled us to assemble massive sequence libraries for both healthy and tumour tissue, revealing the diverse genetic changes found in tumour cell populations. With these two technologies combined, we can now better understand cancer genomes and create disease models driven by genetic abnormality.

The effects of this new approach to biological sciences are only now beginning to trickle down to the clinical setting. Use of CRISPR/Cas9-engineered cancer model systems to accelerate the development of targeted therapies is one example of this effect. By using CRISPR-based genome engineering to make precise changes to the genome of a target cell line, we can now alter those lines in a way that closely mimics the spontaneous development of cancer in a healthy tissue. This new, more physiologically-relevant type of cancer model system can be as easy to work with as a historical cancer line or overexpression model for drug discovery and development. Moreover, CRISPR/Cas9-engineered cancer models can be designed to mimic specific cancer genotypes found in clinical patient samples.8 When used together with the unedited parental cell line, engineered cancer cells come with a built-in isogenic control with an identical genetic background. Engineered cancer models can then be assembled into isogenic cancer panels by introducing sets of genetic variants in parallel. These panels can in turn be assembled into large libraries of engineered cancer cell lines cross-referenced by tissue type. Successive gene edits can be made in engineered cancer model lines to mimic the accumulation of oncogenic mutations in physiological tumour samples. This precisely defined and well-controlled generation of cancer models provides a new tool to enable accelerated development of novel therapeutics, thereby unlocking the potential of targeted therapies for the treatment of cancer.

ATCC has been steadily building and developing an array of CRISPR/Cas9 genome-editing capabilities and leveraging its extensive library of human cell lines for the development of more physiologically-relevant human cancer models. These new cancer models are specifically designed to address the lack of suitable model systems needed to develop drugs for newly identified molecular targets. The first new cancer model line to emerge from this gene-editing pipeline was an EML4/ALK oncogenic fusion that was engineered in a lung adenocarcinoma model.9 By demonstrating that this engineered gene fusion functions in the same way as spontaneous EML4/ALK rearrangements isolated from clinical tumour samples, this cancer model paved way for the development of more engineered cancer models for other well-known and emerging drug targets. For example, a model glioma line was engineered with an IDH1 R132H allele to recapitulate the way cellular metabolism is altered in IDH1 mutant gliomas.10 Because the R132H mutation was engineered directly into the endogenous IDH1 gene locus of this model line, rather than overexpressed from a third IDH1 gene inserted elsewhere in the genome, the model shows levels of D-2-hydroxygluterate accumulation in line with clinical IDH1 mutant glioma samples. This added degree of physiological relevance makes the new glioma model both a useful tool for IDH1-targeted drug screening and an accurate IDH1 biomarker reference model. Similarly, an engineered IDH2 R140Q mutant cell model for acute myeloid leukaemia was developed that mimics the genetic alternation and metabolic changes that drive progression of AML.10 Again, this engineered cancer model shows physiologically-relevant levels of 2-D-hydroxygluterate accumulation and responds to IDH2-targeted inhibitors in the same manner as clinical AML isolates. When used as an isogenic pair with parental control cells, engineered cancer models like these IDH1 and IDH2 mutant glioma and AML lines represent an important step forward for the development and use of targeted cancer therapies. 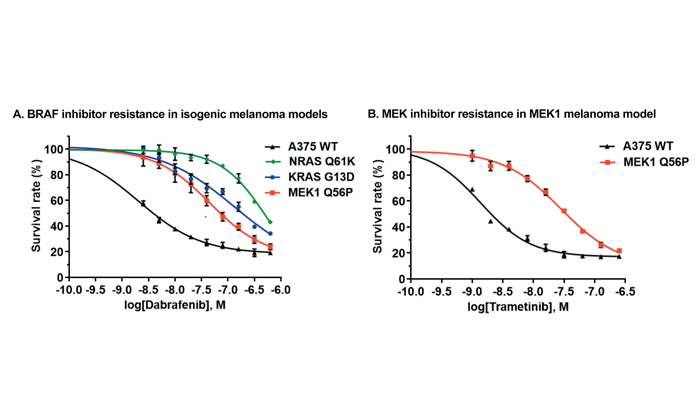 The clinical outcomes of targeted therapy are often compromised by patients developing resistance to therapies. Acquired resistance to targeted therapies in cancer is reminiscent of the rise of antibiotic resistance in bacterial infections; patients who initially respond well to a targeted cancer therapy later develop tumours that are resistant to that therapy. The most notable example of this phenomenon is the development of resistance to BRAF inhibitor therapy in melanoma patients.11 Initially, BRAF inhibitors such as dabrafenib and vemurafenib are highly effective for the treatment of metastatic melanomas with BRAF V600E mutation:12 tumours shrink and disappear, but can aggressively reappear six months later resistant to BRAF inhibitors. Development of new therapies to treat these resistant tumours is therefore essential. Screening of these new drugs relies on drug-resistant cancer models that carry the oncogenes that resulted in the initial onset of cancer as well as additional mutations that render them resistant to targeted therapy. Most traditional cancer models do not accurately represent this complexity.

We have developed a series of CRISPR/Cas9-engineered melanoma model cell lines designed to meet this specific need. Starting with a BRAF V600E melanoma model line, a series of point mutations associated with acquired BRAF inhibitor resistance were introduced into genes that act either upstream or downstream of BRAF in the RAS/Raf/MEK/ERK kinase signalling pathway.13-14 Two of these point mutations, NRAS Q61K and KRAS G13D, confer levels of resistance to BRAF inhibitor consistent with the resistance seen in clinical tumour samples (Figure 1A). Because these engineered NRAS and KRAS mutant melanoma lines can be paired with the parental melanoma cells they were derived from, they provide a more advanced and biologically relevant cancer model system for screening new targeted therapies. Another CRISPR/Cas9-engineered BRAF V600E melanoma model line has been designed that carries a Q56P mutation in MEK1 that renders these cells resistant to both BRAF and MEK-targeted inhibitors (Figure 1B). This isogenic melanoma model line is more sensitive to the commonly used BRAF/MEK inhibitor combination than to any equivalent dose of either inhibitor alone – a clear demonstration of the power of gene-engineered cell lines for accurately representing specific cancer disease states. With engineered cancer models like these, we can more confidently anticipate faster development cycles, lower failure rates, and exciting new directions for targeted cancer therapy.

DR ELIZABETH TURNER GILLIES is a scientist in Cell Biology Research and Development at ATCC. She received her PhD in Molecular Biophysics and Biochemistry from Yale in 2015 and conducted her post-doctoral research at ATCC. Elizabeth currently works on CRISPR/Cas9 engineered advanced cell models, 3D tissue culture models, and enhanced viral production cell lines for vaccine manufacturing.

DR FANG TIAN is the head of the Cell Biology R&D group at ATCC. She is responsible for overseeing over 4,000 human, animal cell lines and hybridomas in the Cell Biology General Collection. Her R&D team has been generating scientific high-value cell lines from various species, as well as developing advanced cell models focusing on diseases, molecular signatures, cell signalling pathways, and genetic alternations.