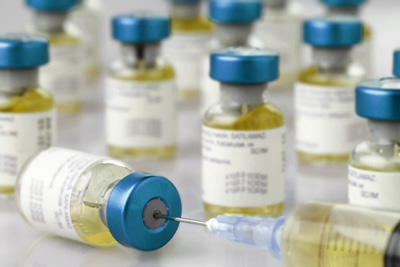 The latest in a series of reports by the Review on Antimicrobial Resistance (AMR) says that vaccines and other alternatives can play a vital role in tackling the rise of drug-resistant infections.

As existing antibiotics become less effective, because microbes evolve to resist them, we need to use those that we have more responsibly, and ensure that we develop new ones. But even with increased investment, there is no guarantee that we will be able to find enough new antibiotics to tackle this problem in the long-term. Therefore the report says we also need to encourage the development and use of alternative ways to prevent and treat infections.

The report sets out that there are too few vaccines and alternative approaches to antibiotics available for doctors to use to tackle many of our most urgent drug resistance threats. More investment needs to go into developing these products.

Vaccines can be useful to combat drug resistance because they reduce the number of infections and avoid antibiotics being used, which is a key driver of drug resistance. But vaccine development takes a long time, often more than 10 years, and is expensive, with the vast majority of potential vaccines failing to reach the market. Of the three “urgent” resistance threats highlighted by the US Centers for Disease Control and Prevention (CDC), carbapenemase-producing bacteria (including Klebsiella, E. coli), gonorrhoea and C. difficile, we have no vaccines in use for any of them, and too few candidates in clinical trials.

In addition to vaccines and in response to the growing threat of drug-resistant infections, the report highlights many new areas of scientific research emerging that could become alternatives to antibiotics or help reduce our dependence on them by preventing infections. However, for many of the most worrying drug-resistant diseases the current pace of progress and funding offers little to no hope that new products will be available in the next five to ten years.

The paper also sets out that we should make more use of products that we already have. There are vaccines available now that could have a massive impact on antibiotic use and resistance, as well as saving many lives if used more widely.

Three interventions to boost use of existing vaccines and vaccine development

The report suggests three interventions to boost the use of vaccines today and the development of new products.

To contain the emergence of drug resistance globally, the report states that these interventions will need to be designed to deliver access to the patients who need them, wherever they are and regardless of levels of income.

The Review will spend the coming months engaging with governments, NGOs and industry globally to discuss and develop these proposals further, with input from an international advisory group, before presenting a final report in the May 2016, covering the whole AMR landscape.

Commenting on the report, Dame Sally Davies, Chief Medical Officer for England, said: “Tackling antimicrobial resistance requires a wide range of approaches and developing alternatives to antibiotics, in humans and animals, is critical to the fight.  Vaccines have a vital role to play in combatting drug resistance, by preventing infections in the first place.

As the latest report from Lord O’Neill makes clear, we need to encourage the development of new products, as well as using existing ones more widely.”

In a statement, GSK reponded: “As one of the world’s largest vaccine companies and one of the few still active in antibiotics, we welcome today’s report calling for an increased uptake of vaccination and the further development of new vaccines as means of reducing reliance on antibiotics.”