A molecule that could significantly reduce brain damage in stroke victims

This graphic depicts a new inhibitor, 6S, locking up an enzyme (red) to block the production of hydrogen sulfide (yellow and white). Hydrogen sulfide concentrations have been shown to climb after the onset of a stroke, leaving to brain damage. CREDIT: Matthew Beio, University of Nebraska-Lincoln Researchers have developed a molecule that can inhibit an […] 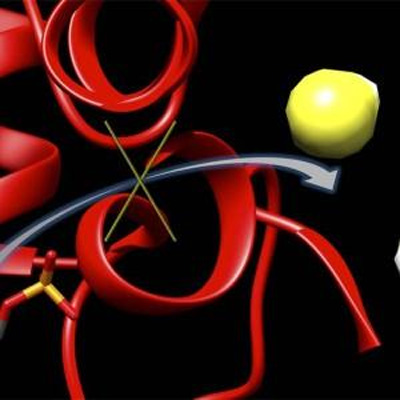 This graphic depicts a new inhibitor, 6S, locking up an enzyme (red) to block the production of hydrogen sulfide (yellow and white). Hydrogen sulfide concentrations have been shown to climb after the onset of a stroke, leaving to brain damage. CREDIT: Matthew Beio, University of Nebraska-Lincoln

Researchers have developed a molecule that can inhibit an enzyme linked with the onset of stroke.

Most strokes occur when a disruption of blood flow prevents oxygen and glucose from reaching brain tissue, ultimately killing neurons and other cells. The team found that its molecule, known as 6S, reduced the death of brain tissue by as much as 66% when administered to the cerebrum of a rat that had recently suffered a stroke.

It also appeared to reduce the inflammation that typically accompanies stroke, which the World Health Organization (WHO) has estimated kills more than 6 million people annually.

The inhibitor works by binding to cystathionine beta-synthase, or CBS – an enzyme that normally helps regulate cellular function but can also trigger production of toxic levels of hydrogen sulfide in the brain. Though hydrogen sulfide is an important signalling molecule at normal concentrations, stroke patients exhibit elevated concentrations believed to initiate the brain damage they often suffer.

Chemist David Berkowitz and his colleagues at University of Nebraska-Lincoln (UNL) modelled their inhibitor on a naturally occurring molecule produced by the CBS enzyme, tailoring the molecule’s structure to improve its performance. By swapping out functional groups of atoms known as amines with hydrazines, the team ultimately increased the inhibitor’s binding time from less than a second to hours.

“We wanted a compound that would bind well, specifically to this enzyme,” said Berkowitz, a Willa Cather Professor of chemistry. “But we also wanted one that could be synthesized easily. Those are two very different considerations.”

Because the 6S inhibitor has demonstrated its effects in cell cultures and the brain tissue of rats, Berkowitz cautioned that it represents just an initial step toward developing a stroke-treating drug for humans. However, he said the proof-of-principle experiments effectively illustrate the concept’s promise.

Berkowitz also expressed optimism that the synthesis method detailed in the study could streamline the more general production of enzyme-targeting inhibitors.

“We started out with a very fundamental-science perspective on understanding the chemistry of this whole class of vitamin B6-dependent enzymes,” he said. “We’re in a good place now, because that science has allowed us to make these inhibitors and many others. We’re now working on several enzymes that may represent important targets for translation of the basic inhibitor chemistry into truly therapeutic goals.”