Epiregulin identified as a possible target in lung cancer 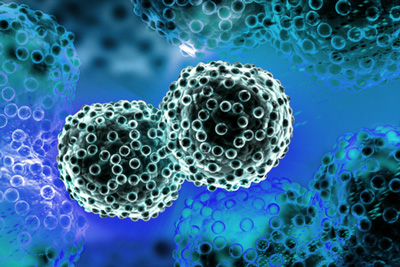 The overabundance of growth factors has been implicated in the development and spread of many cancers, most famously the up-regulation of EGF and EGFR receptors in lung cancer, which is now successfully targeted by anti-EGFR therapies. However, a new study points to a related target, namely epiregulin, an under-studied EGF-like growth factor.

“A couple years ago, we identified epiregulin, or Ereg, as a potential biomarker during transcriptomic studies using two separate mouse models of lung cancer,” says Alison Bauer, PhD, investigator at the University of Colorado Cancer Centre and assistant professor at the Colorado School of Public Health.

“This is in line with what you would expect from a functional growth factor,” Bauer says. “It appears as if Ereg increases cell proliferation, with increased levels of Ereg in cancer cells promoting the growth and proliferation of tumours.”

Much of the science around Ereg is poorly understood

Because Ereg is under-studied compared to its cousin EGF, much of the science surrounding this growth factor is still poorly understood. For example, Bauer points out, though Ereg appears to influence inflammation, how, why and the consequences of this influence are unknown. She plans on investigating the mechanisms driving these responses in future studies.

“This really is new,” she says. “And while that presents a challenge in the lack of science surrounding Ereg, it also presents an exciting opportunity to push forward with a promising biomarker that hasn’t been described in this context.”

While the specific biomarker of Ereg is new, the path that leads from biomarker discovery to a successful medicine is not. Bauer points out that many current therapeutic targets in lung cancer including EGFR, ALK and ROS1, started as biomarkers of unknown significance.

“This is the first step – well, actually the second step – in the exploration of Ereg as a prognostic marker and potential target in a subset of lung cancers,” says Bauer. “We hope that our future studies continue to prove its promise.”